Don’t call it a comeback. Don’t even label it a reunion. Only frontman/leader Steve Marsh remains of this golden era ATX punk trio.

Term it a reactivation. 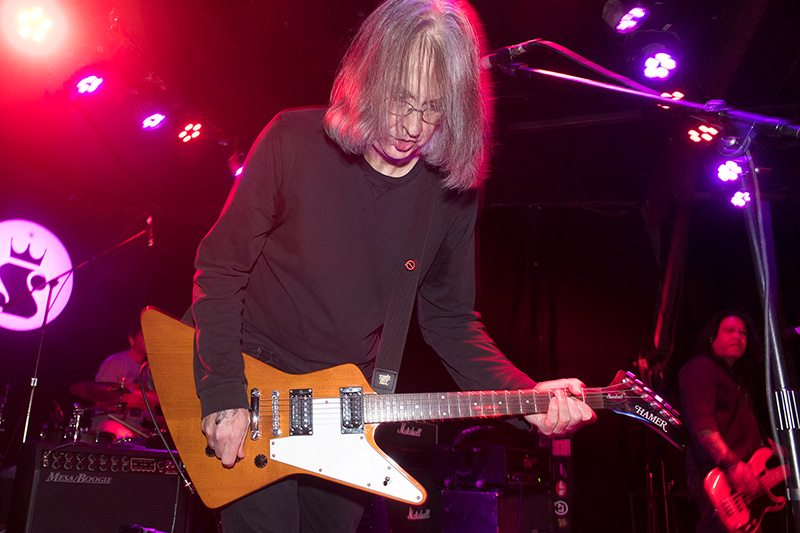 On the first night of SXSW Music showcases, outside on Red River at Sidewinder, Terminal Mind crackled and banged like 1978 on the Drag inside ATX’s CBGB equivalent, Raul’s.

Once new drummer Coby Cardosa, moonlighting from the Crack Pipes, cracked his snare to commence “(I Give Up On) Human Rights,” it was on. The 40-minute blast of dystopian angst that followed couched in curdled guitar aggression and power trio lift. Leaving bass duties to Ray Lujan (ex-Bulemics), the 6-foot-5 bandleader proved himself a barbaric and adept six-stringer, ably reproducing absentee TM axe-smasher Doug Murray’s slashing chords and gnarled solos – and then some.

And Marsh didn’t just play at six-string plagiarism. Instead, he offered his own twist on punk power-drive, at one point turning on every effects box on his well-stocked pedalboard to create a beautifully unholy racket to open a bruising cover of Ultravox’s “Fear in the Western World,” the set’s high point.

“We have T-shirts and records for sale,” he prompted halfway through the performance, sheepishly adding, “although the records were all made in 1978 and ’79.”

No need for false modesty. As Marsh noted at January’s record release party for Recordings, the current “presidency” has given social protest punk new relevance. Ancient anthems like “I Want to Die Young,” a nihilist take on the Who’s “My Generation,” and “Black” sounded as fresh and purposeful on Monday night as they did in the heyday of Monday Night Football.

Clenching his jaw behind curtains of lank hair, Marsh unwittingly resembled Patti Smith Group guitarist Lenny Kaye. Even so, Terminal Mind has re-established their footing in a modern world more bleak than the landscape they inhabited in their heyday. We need them.