At 12:25am Tuesday morning, Max Richter had only been on the stage at Bass Concert Hall for 15 minutes and someone was already snoring. During a typical concert this would be a horrible insult. For Sleep, it proved a high compliment. 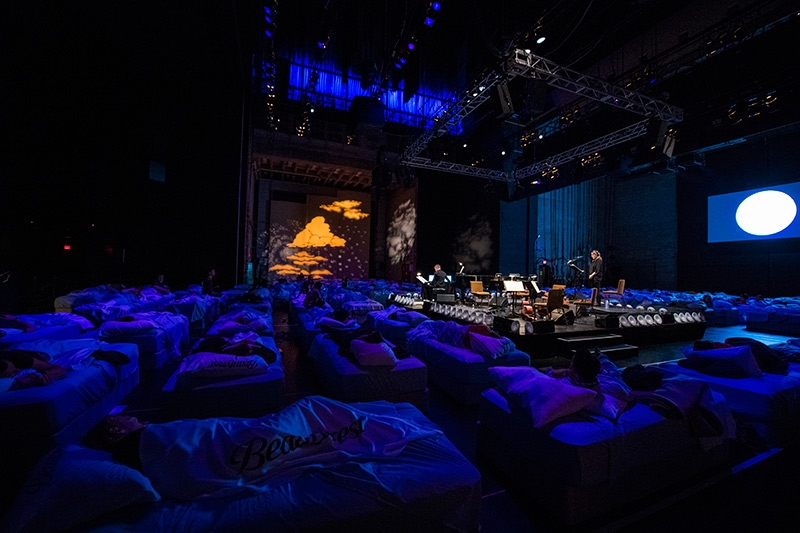 Best known for lush film and TV scores (The Leftovers), Richter’s latest project is an eight-hour composition designed to be played overnight by seven musicians. Last night’s SXSW performance was the North American premiere. The piece debuted in 2015 and had been played 11 times previously.

The Austin audience lay onstage in 150 twin-size Beautyrest beds, which were donated to charity afterwards. More witnesses sat in 200 overflow seats out front. Non-badge holders had to leave at 2am, but were allowed back at dawn to experience the end of the piece.

Although nobody likes a snorer, there’s no wrong way to experience Sleep. The only instructions were a polite request not to make much noise and the crowd acted respectfully. A full moon projected on the wall gave just enough light to find your way to the bathroom (or scribble a concert review), but as soon as the music started, the rest of the beds seemed to disappear to create a concert for one.

It feels like a cop-out, but my best description for the music is dreamlike. The tempo rocked like a boat as Richter played piano with lazy precision, sidestepping the downbeat by milliseconds and never settling into a strict groove. Strings, a woman’s voice, and sub bass rounded out the ensemble.

At times, the music was a pool of ambient textures with long bass notes cresting like waves above water. Violins sliced through the still auditorium, offering the most pronounced melodies. A solo vocal section ballooned with enough reverb to make you feel like you were laying in the middle of a choir.

Personally, I have no idea how much I slept. My only plan was to keep my cell phone off. I drifted in and out of sleep, but mostly I was somewhere in between.

I’d feel my breathing link up with the bass, while my mind chased the piano. Thoughts raced, then stumbled, then dissolved. I tossed and turned, but never felt restless.

At moments, the music fought for my attention, but never demanded it.

Like most busy people, it’s rare that I allow myself a full ration of rest. The concept of eight hours in bed without a screen felt like a luxury – especially during SXSW. It turned out to be just what I needed.

Of course without an excuse like this, it’s not something I would have ever allowed myself. The performance filled me with many emotions, but the most surprising was that of being forgiven for indulging in what’s perhaps the most critical of all human activities.