Combating nations' "race to the bottom" of the web

Tweet
print
write a letter
In the halcyon days of the early internet, users envisioned a future in which information would freely cross borders, uniting nations and spreading ideas about human rights across the globe. But recent government interference on the web has made this ideal, open world seem increasingly out of reach. To navigate this troubling trend, panel moderator Jan Gerlach of the Wikimedia Foundation assembled a group of speakers with expertise in internet freedom advocacy and global law: Barbora Bukovská, Director for Law & Policy at Article 19; executive director of Digital Asia Hub, Malavika Jayaram; and director of ITS Rio, Fabro Steibel. 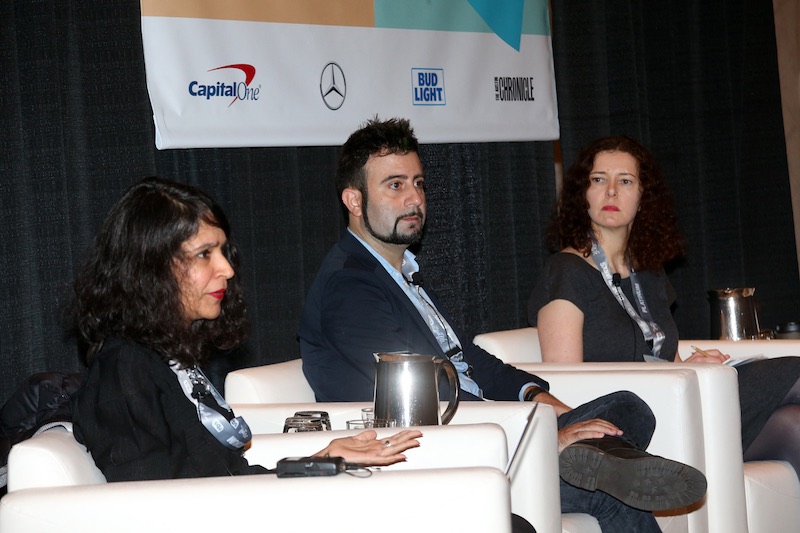 l-r: Malavika Jayaram, Fabro Steibel, Barbora Bukovská (Photo by Gary Miller)
The panel began by discussing how governments have begun to more aggressively enforce local laws and cultural norms on the internet at large. This has repercussions that can extend beyond these countries’ borders, like a recent incident in which China induced car manufacturer Mercedes-Benz to apologize for quoting the Dalai Lama on Twitter. Government requests to take down or block content on the net began with efforts from established democracies to target IP violations and pedophilia, but governments with less progressive views on human rights saw this as model to be expanded to increase their power, resulting in a "race to the bottom." “In Asia, it’s actually seen as a competition,” Jayaram said. “It’s like ‘Oh, Pakistan made 800 requests for removal. India only asked for 200. We need to up our game.’ People are actually seeing this as a playground where they can do more to suppress information.” To combat this trend and try to keep the internet safe from government censorship, the panelists argued that the West must appeal to pragmatism, arguing that human rights and the free flow of information are more than just Western ideals, but common sense. “If you want to be a market leader … how are your researchers competing in a global marketplace if they don’t have access to global scholarship?” Jayaram asked. “Even if you don’t care about human rights, if you do care about competitive advantage, you should have access to information that’s available globally.”

Keep the Internet International, Not Internal!