Two sisters, aged 7 and 9, accused their aunt, 20-year-old Elizabeth Ramirez, and her three friends, Kristie Mayhugh (21), Cassandra Rivera (20), and Anna Vasquez (19), of assaulting them over the course of a weekend. Authorities learned the women were gay, and the viciously homophobic prosecutors accused the women of being devil worshippers and assaulting the girls as part of an elaborate lesbian ritual. 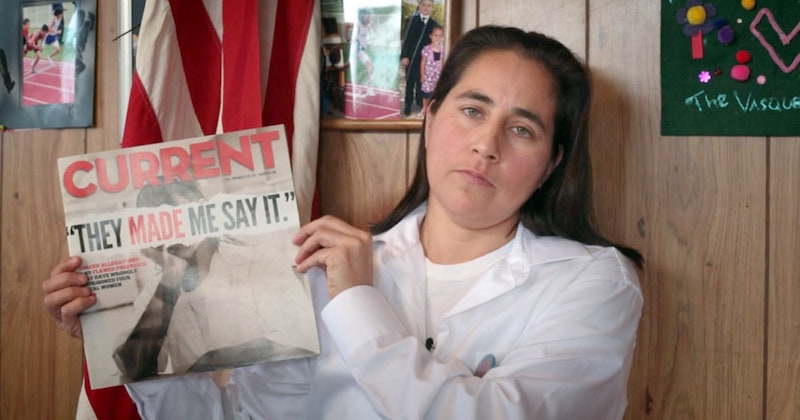 A screenshot from Southwest of Salem

Lending credence to their madness was “Satanic Panic,” a wave of satanic abuse allegations beginning in the late 1980s that targeted mostly childcare workers and riddled small-town police and courthouses with a fearful, hysterical groupthink, wherein international satanic cults had infiltrated America.

While all four women maintained the crime never took place, the unraveling, coached testimony of the girls and junk forensic evidence worked to convict them. Ramirez, considered the ringleader, was sentenced to 37.5 years. The other women were sentenced to 15 years each and served most of their sentences before finally being exonerated in 2016, when one of the girls recanted her accusation in front of Esquenazi’s camera.

We spoke to the Austin-based Esquenazi over the phone ahead of her upcoming SXSW panel about the secretive new project she’s working on and what legacy she hopes Southwest of Salem leaves.

Austin Chronicle: You must be very busy getting ready for your upcoming SXSW panel.

Deborah S. Esquenazi: You know, I’m not really sure how to get ready. The best thing I can do is just talk about my experience. Obviously, this is a very sophisticated panel, who have a lot more experience than I do. I had been an investigative reporter for awhile before I started making films, but Southwest of Salem was my first big beast. It took me seven years. All I can do is try and go back in my memory bank, to try and convey what I can about the true crime genre and investigative work.

AC: What is your personal relationship with the criminal justice system? I imagine it can’t be easy, after making this film, to feel like you are within a system that is working.

“I am Latina, I’m also a lesbian, and I still will never know what it’s like to endure that kind of homophobia or that kind of racial injustice.” – Deborah S. Esquenazi

DSE: Oh, the rage is pretty intense. No doubt. Here’s the thing, I think now that I’m a much more sophisticated thinker in terms my critical understanding of the justice system. I started to study something called crime myths and crime mythology. Basically it’s the stories we tell about what justice is: Who are the actors? Who are the heroes? We’re in a much better position now, because we talk about policing, we talk about prosecutorial misconduct. But when I started making Southwest of Salem I felt like we were still in a space where it was like, "Oh, the defendants, of course they’re guilty! They’re guilty of something, right?" Because why on earth else would they be being investigated. But that’s such bullshit! And it was beyond bullshit for these four women. So I mean, my personal feeling was, I spent seven years shuddering from the audacity of it all. I can’t believe people get away with this, is really what I was feeling. On the other hand, I also witnessed an extraordinary level of psychic endurance that I had never seen before. So, what could have destroyed my inner self, instead I saw what the capacity for bravery and courage look like, and I had to let that drive me. I am Latina, I’m also a lesbian, and I still will never know what it’s like to endure that kind of homophobia, or that kind of racial injustice. Even though I share that social identity, I’ll never know. It could really kill people. The truth is when you get to see or witness that kind of transcendence of power. It’s actually really inspiring. I hope that the film does that when you watch it, I hope people get to see what real bravery, when the odds are totally against you, look like.

AC: That makes me think of a part in the movie where one of the women says, “When you’re faced with having to go to jail, you have this feeling of, maybe I should run.” I thought, wow, she’s so much braver than I am.

DSE: Anna Vasquez said that. We’re all very close. You know, some people ask me about the film and wonder what it would look like if a white male made the film. And I do think it would be a different film. The intimacy that you see is because we share these social identities. I feel like these women are my family. Recently, I was on a southern tour of the film, with Anna Vasquez, just she and I after all these years of work. And we talked about that moment in the film, and she said not only did she want to run, but she said her family, these incredibly moral people, were like, oh no, it’s time for you to run. She was like, when my mother said that, it was like a moment of real pain. She was like, should I run? And I said I totally get that. I totally get how hard that would be to face your family and they’re just like, we don’t think you can handle this anymore. That would be so heart wrenching.

AC: Absolutely. Southwest of Salem was so powerful, how did you come to the conclusion that the story needed a second look?

DSE: I was making a follow up film to Southwest of Salem, but Southwest of Salem… There’s a sort of new thing I’m working on, and I’m not really allowed to talk about it yet! So unfortunately, I can only talk about Southwest of Salem right now with you. But I will say, after seven years, the ending of the film, where they are exonerated, was shocking even to me. I still hold that so precious, and I think about it all the time. We got to witness these women fight for their lives, and it’s a pretty precious thing.