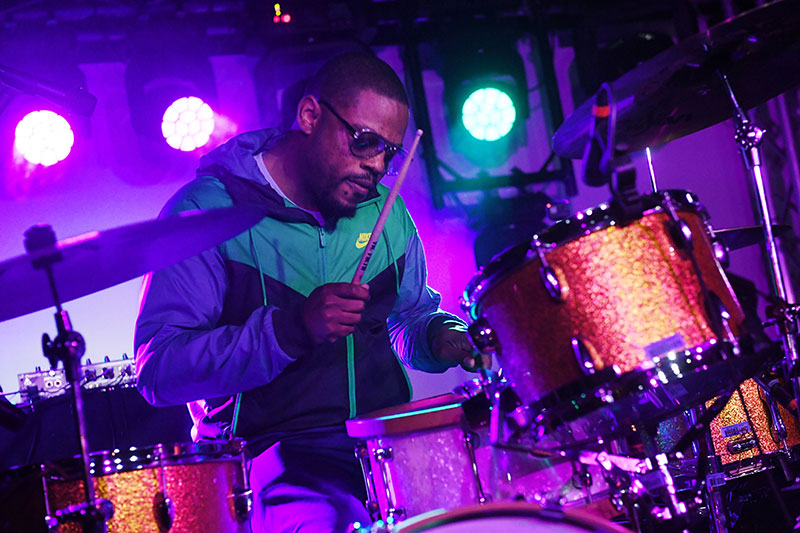 Cincinnati native and fully self-taught violinist and producer Sudan Archives (Brittany Parks) would usually be called something lazy like neo-soul. Yet, using African fiddling orchestration over modern hip-hop and soul fare, her forthcoming debut album, from which she sampled, throws back to a literal salt-of-the-earth time and place.

Wolf-masked, Koreatown Oddity – Dominique Purdy, actually raised in Koreatown, Los Angeles – plies a roving, multisyllabic delivery that rings of a lost Wu-Tang member on the chunky “Mood of the Grind.”

“Gotta cut out the middleman to extend my bread/ Evil lurks in the hearts of these sour-faced lemon heads.”

Only interested in a groove and nothing but, L.A. producer/singer Mndsgn (Ringgo Ancheta) provided soulful, Eighties-era funk clearly influenced by cult funk legend Steve Arrington and other West Coast funk/boogie acts. “Guess It’s All Over,” from latest release Body Wash, boasted syrupy, processed vocals over his signature basslines. He brought up Anna Wise, known for her work with Kendrick Lamar, for silky synth-funk single “Some Mistakes.”

Initially made famous when Drake plucked his gorgeous voice to sample on “Jungle,” from If You’re Reading This It’s Too Late, French-Colombian Gabriel Garzón-Montano has separated from the hype, poised to break out with his transcontinental soul on 2016 debut Jardin.

“I tried to have you fall in love with me,” he croons on swirling pop-funk floater “My Balloon.”

We did. Live, “Sour Mango” and “Crawl” leaned even heavier into GGM’s inherent swing and heavy low-end.

Detroit native and jazz-hop hero Karriem Riggins remains one of the few drummers in the world that you’d pay to see only pound the skins. And he does so with a virtuoso’s vigor and nothing more than a laptop of ridiculous beats accompanying him.