“Hi, we’re the Sandinistas,” grinned singer/guitarist Dan Hagerty at the 20 people gathered before the punk-pop trio two songs into their SXSW showcase at Javelina on Friday night. “We’re from South Wales in the UK. If you don’t know where that is,” he added, tongue firmly in cheek, “that’s where Tom Jones is from.” 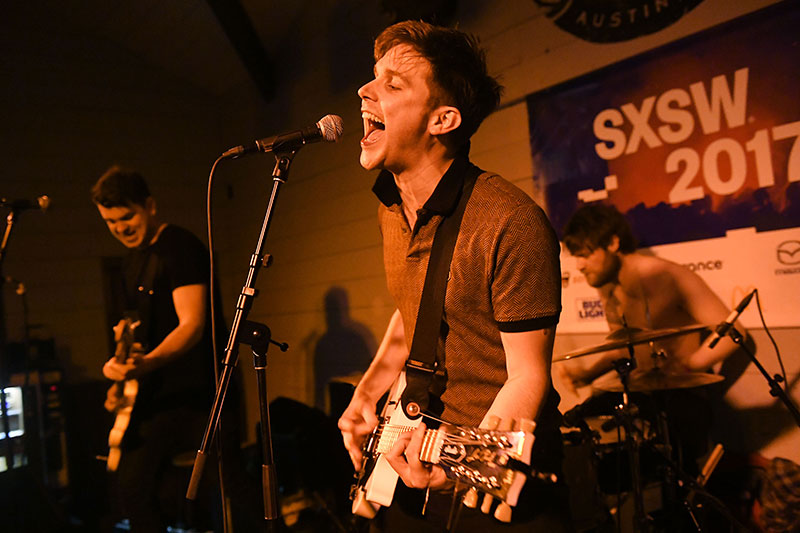 He could’ve referenced some Welsh acts that would’ve better set the stage for their aggressively melodic stomp: The Alarm, Manic Street Preachers, maybe. Prior to taking the stage, he unabashedly revered rock & roll icons from the British mainland.

“My favorite band is the Beatles, but the Clash are my heart.”

How could they not preside prominently in Hagerty’s pantheon, since the Sandinistas bear the name of that group’s experimental triple LP from 1980? The trio’s sound, meantime, channels their inspiration’s early singles like “Clash City Rockers” and “Complete Control.” Yet as the singer/guitarist and bassist Chris “Slim” Morgan, plus a pickup drummer they’d met only two weeks before, pummeled through their half-hour, they weren’t trying to uphold any sort of tradition.

Hagerty’s also the sorta Clash fan whose idea of a political song is a sarcastic profession of love to Melania Trump.

Those gathered before the Sandinistas weren’t numerous. The band played through rented amps and drums due to the logistics of navigating a small number of U.S. dates centered around a major music festival. Still, as they unleashed debut broadside “Ready to Blow” in the home stretch, they didn’t appear worried.

The Sandinistas invaded our shores and won.