“Not gonna happen, kid,” the doorman at Mohawk said plainly to a SXSW wristband holder asking hopefully about getting in before 11pm for UK electro R&B musician Sohn. The venue’s outdoor stage hit capacity a little after 10pm for independent record label 4AD’s showcase. 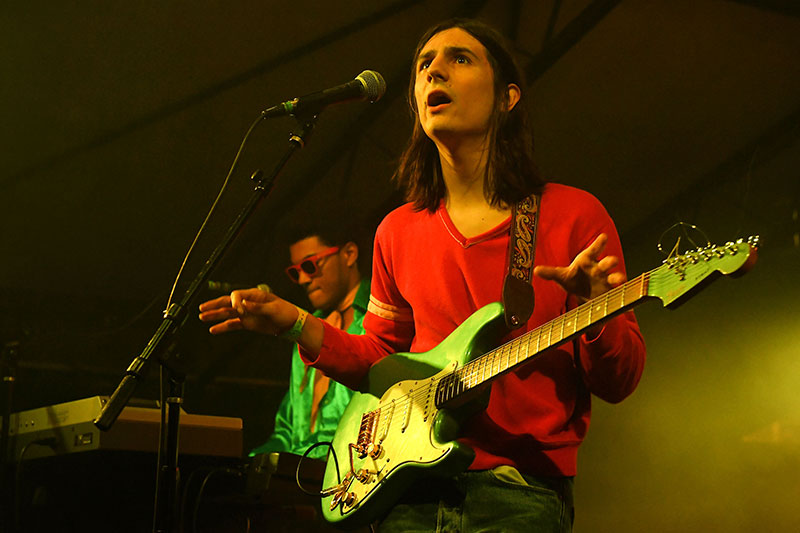 Most in line were there to see the closing set from Baltimore’s viral synth-pop outfit Future Islands, led by manic frontman Samuel T. Herring, or Sohn. While both churned out tight, bass-heavy, high-energy performances, Mohawk’s stage belonged entirely to the midnight set nestled between them: Lemon Twigs.

Last month, the quartet put on a killer sold-out show inside at Stubb’s, but their turn outside Mohawk on Friday night transcended. This is a band that thrives on larger stages, gifted the natural ability to electrify enormous crowds.

The Long Islanders’ set delivered a flawless 40 minutes existing at the intersection of over-the-top theatrics and mind-blowing musicianship. They shredded out Seventies pop laced with traces of Todd Rundgren, Queen, and the Beatles. For all the high-kicks, drumstick twirling, split jumps, and thrashing about, the D’Addario brothers, along with a keyboardist and bassist, never missed a note.

Showcasing last year’s debut LP Do Hollywood, older sibling Brian D’Addario mostly helmed lead vocals and guitar. With a sweet croon and an enormous vocal range, his voice fluctuated from Alex Chilton vibes in one moment to Freddie Mercury the next, particularly when he and brother Michael harmonized on “I Wanna Prove to You” and “These Words.”

After their whirlwind onstage, SXSW had busted out another buzz band. Lemon Twigs surpassed the hype. Next time, they’ll be playing a much larger stage.