Wrestling guitars back from the rise of synthesizers

It’s 2017 and the guitars have survived the apocalypse. Not only that, they’ve thrived in this brave new world of machines and humanoids. Or at least that’s what we gathered from Grandaddy’s set Friday night at Stubb’s. 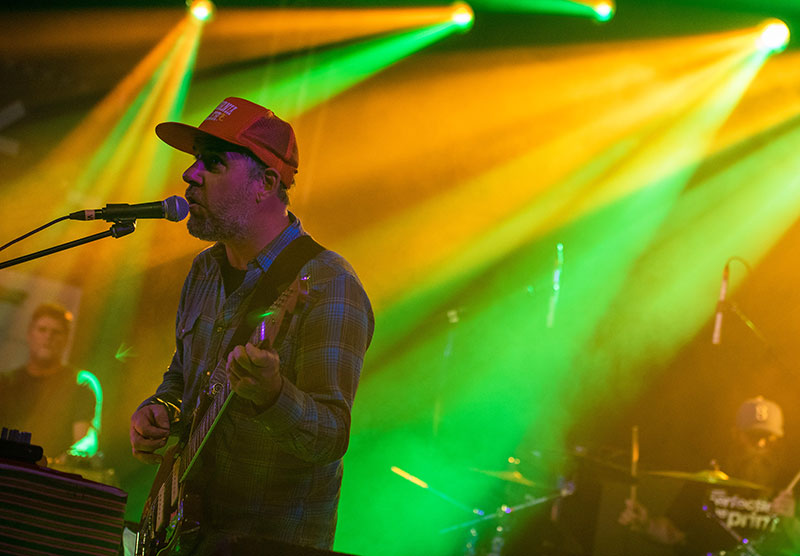 For 90 minutes, the Modesto, Calif., fivepiece – out with a new album for the first time in over a decade – made a bold case that six strings could very well carry us through the end of days, a juncture of intense fascination for the band. Early set addition “Way We Won’t,” from this month’s Last Place, pulled a full-out metal breakdown before heading back into the spacier synth effects Grandaddy’s known for.

Even in the moments bandleader Jason Lytle set aside his axe completely, like for the synth-heavy “Evermore,” the lead guitarist managed to jerk attention back onto his frets. And this guitar focus wasn’t solely on new material.

It quickly became apparent just how reliant Grandaddy is on the shock of energy a guitar chord can deliver. Though a quirky synth line carries “A.M. 180,” the explosion of guitars at the bridge supercharges the song. And the cathartic, post-chorus guitar breakdown on 2003’s “Now It’s On” saw Lytle jump from second synth back into the guitar explosion.

None of this is a sea change for Grandaddy, but it’s easy to forget, in an international music scene that now prizes synthesizers in a way Grandaddy couldn’t have anticipated way back in 1997, that guitars still make up an integral part of the formula.

What’s that old saying? You don’t know what you’ve got until you’ve entered into a dystopian society ruled by machines.