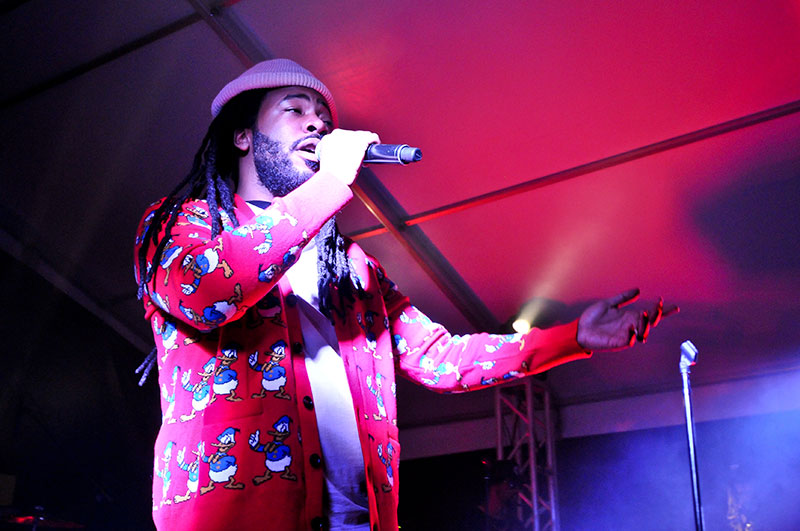 Backed by a drummer and button-masher, 20-year-old Zimbabwean-Australian rapper/singer Tkay Maidza opened the bill by putting proverbial foot to ass. Singles “Uh Oh” and “Afterglow” require her Nineties club dance movements, some modern dubstep and trap inflections punching through. On the bouncy “Ghost,” she’s equally Black Box or C+C Music Factory as she is a more stable Azealia Banks.

Jagged edge, Benjamin Booker brought his signature rawness, utilizing a muscular fourpiece as buzz saw. Playing “Happy Homes” as hardened rockabilly, the 27-year-old New Orleans-based guitarist growled, “Does her mother know her daughter’s gone? Is she down on her knees, now, crying?” A statement on racism, “Witness” lost its gospel sensibility in a live setting, turned into a bluesy jaunt overrun by Booker’s glass-chewing metal snarl.

As fiery as ever, Brooklyn MC Talib Kweli leveled up, blending past to present throughout. Including throwbacks to early albums (“Down for the Count” and his verse on Kanye’s “Get ’Em High”), the rapper’s commanding quartet even ran down Vince Guaraldi’s Peanuts theme and “Ruff Ryders Anthem” back to back. Kweli prompted mass sing-along with a Beatles sample weaving into his “Lonely People,” on the end of which Chicago femcee K’Valentine killed an a cappella verse.

A show-stopping, life force-giving ode since it dropped, “Get By” found the diverse crowd managing a gospel double-clap in the stirring closer.

Wearing a Donald Duck cardigan and a trademark, Magic Johnson-like smile, singer/rapper D.R.A.M. (Shelley Massenburg-Smith) demands one embracing life’s comedies without self-seriousness. The Hampton, Va., product croons slick R&B with a wink and a smile on “Signals (Throw It Around)” and about the reckless come-up on “Cash Machine”:

“I ain’t talkin’ to you broke bitches, I got money now.”

Sloughing off the rap gruff, D.R.A.M’s best quality is speaking clearly about things. So on “Broccoli,” when he says, “Ain’t! No! Telling! What! I’m! Finna! Be ooooonnnn!” the unlikely star, and the crowd, believes themselves on top of the world.

In that moment together, we’re “beyond all that fuck shit.”