Even death won’t get festivalers off Sixth Street

Poor Grizzly Hall. The cozy Riverside club tucked into the armpit of Emo’s never stood a chance against the infinitely hipper Downtown venues boasting breakout punk acts and Pitchfork-approved rappers. Thursday’s South by South Death showcase produced a dismal turnout, but that didn’t stop bands from playing like their lives depended on it. 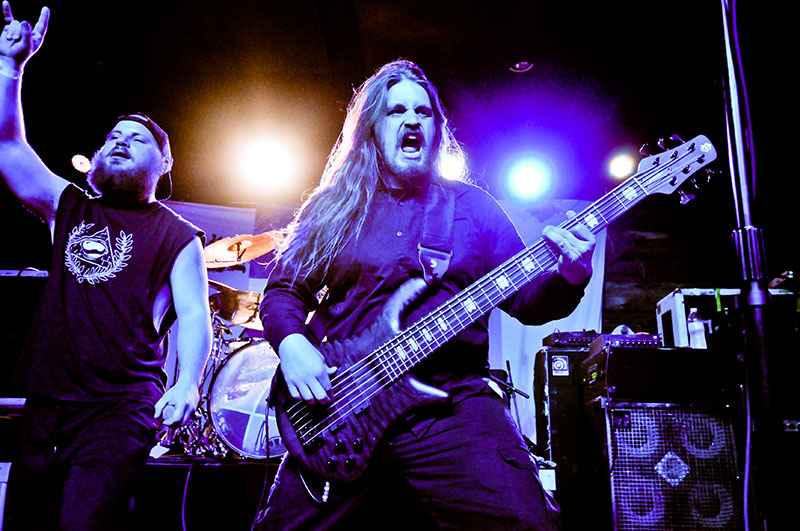 Reading, Pennsylvania, quintet Rivers of Nihil delivered unflinching, hook-laden death metal à la the Black Dahlia Murder, winning over twin headbangers at the front of the stage and a watchful gentleman by the merch table wearing a shirt emblazoned with the words, “Satan is great. Whiskey is super.”

“Thanks for making the long journey from downtown,” he quipped between songs.

Darkest Hour finally stormed the stage at 1am with “Knife in the Safe Room,” blistering opener off their brand-new disc, Godless Prophets & the Migrant Flora. The album eschews the metalcore contrivances of 2014’s self-titled effort in lieu of trademark melodic death metal.

The fivepiece treated the sparse gig as a sold-out headliner, traipsing the stage and headbanging in unison as a dizzying light show illuminated the stage. Lead guitarist Mike “Lonestar” Carrigan fired off whammy bar squeals that would make Kerry King blush as singer John Henry graciously thanked the audience for staying up late to party with them.

It’s a far cry from Mastodon at Empire on Friday night, but to the faithful few in attendance, it meant the world.