Young frontman donning a trim kelly green cardigan, Durand Jones & the Indications opened their fourth set of the day on Thursday night the same way they do their recent debut album. Fatback drums and yearning organ set the tone for the searing sociopolitical soul of “Make a Change.” 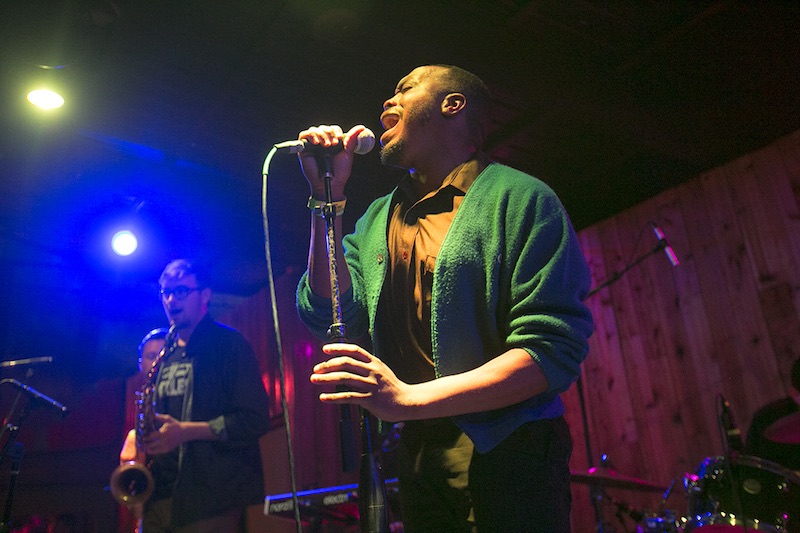 Durand Jones & the Indications aren’t breaking any new ground, but they’re every bit as sharp as the Brooklyn soul posse of the Dap-Kings, Charles Bradley’s Extraordinaires, and Lee Fields’ Expressions. You’d be hard-pressed to distinguish them from any of those groups, which is both a compliment and a small nit to pick.

The frontman, meanwhile, grew up singing at church in Louisiana before moving to Bloomington, Ind., to study music. He earned a graduate degree in classical saxophone and picked up an ace backing band – the core of which are all IU music graduates – in the process.

Midway through the set, Jones ceded the stage to group drummer Aaron Frazer, who crooned “Is It Any Wonder” in a buttery, high-pitched falsetto while keeping time behind the kit. The ultra-slow ballad landed like a lost 1965 B-side and Frazer sounds like what Mayer Hawthorne must hear in his own head. A band’s drummer isn’t supposed to be able to sing like that.

“He’s our lethal weapon,” quipped Jones when told as much post-show. Chicago chanteuse Jamila Woods, whose fat braids fell nearly all the way to the floor, wasted no time before landing a gut punch, flipping the schoolyard rhyme of “Miss Susie/Hello Operator” into a Black Lives Matter anthem:

“Hello operator, emergency hotline/ If I say that I can’t breathe will I become a chalk line?”

On Wednesday, fans wrapped around an entire city block waiting hours to see everyone’s second-favorite Knowles sister. Any of them could have strolled right into the Barracuda Backyard on Thursday and fallen in love with Woods.