He ain’t heavy, he’s my father

Alex and Andrew Smith, the sibling filmmaking team who made The Slaughter Rule and Winter in the Blood, can always be counted on to make smart, evocative films about masculinity and the foundational relationship (or lack thereof) between fathers and sons. Their new film Walking Out once again delivers the goods. 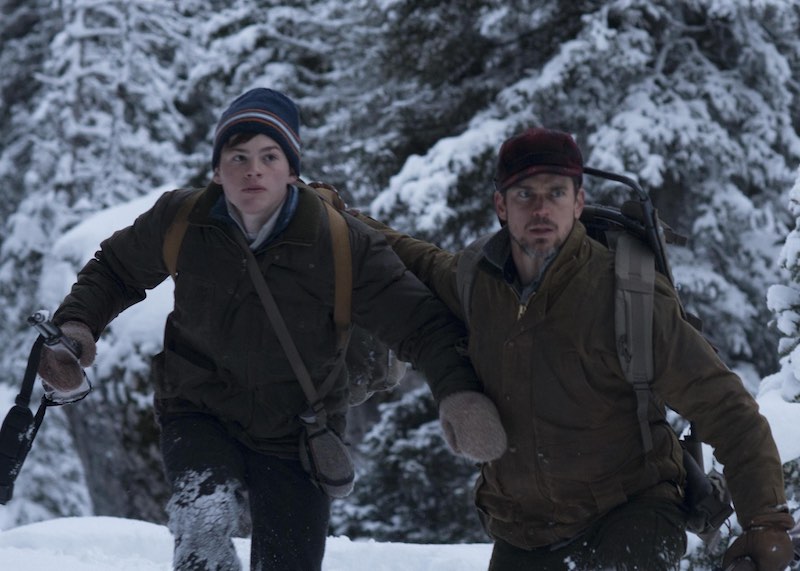 The movie is essentially a two-hander between Cal (Matt Bomer) and David (Josh Wiggins), a father and son who are separated by divorce but reunited for winter vacation. Fourteen-year-old David, cell phone-addicted like most other kids, has come to visit his dad at his backwoods home in the mountains of Montana. Cal plans for them to go out on a hunt and shoot a moose he has spied, although David is less than enthused by the activity at first, turning up his teenage nose at the idea of killing living things, even though the two have gone out hunting during previous vacations. Cal regards it as important to pass on to his son the fundamentals of successful hunting and the ethos of only killing animals for meat and not sport. Flashbacks to his own hunting experiences with his dad include scenes of young Cal (played by Alex Neustaedter) and his father Clyde (Bill Pullman). Texas-bred David gradually gets into the spirit of the hunt and grows appreciative of the unique tips he is learning from his old man. Then disaster strikes, and basic survival becomes the only thing that matters. It’s through this uncharted challenge that David ultimately steps into his manhood. Childish things will need to be packed away at the end of this journey.

The rugged yet stunning beauty of Montana is ably captured by director of photography Todd McMullen (Friday Night Lights, The Leftovers). The twin Smith brothers have filmed all three of their features in Montana, although Andrew taught filmmaking at UT for several years. The state is an apt backdrop for the natural severity and wonder endemic to father-and-son transactions. Bomer, cast against type, and Wiggins (Hellion, Max) deliver phenomenal performances that justify the Smiths’ placing the entire burden of the drama on their shoulders. Little prepares the viewer for the physical and emotional trial that David confronts with intelligence and grace, but by the time the precipitating event occurs (and let’s just say that Leo DiCaprio isn’t the only actor in recent film history to perform epic scenes with a bear), we are ready to witness his valorous emergence. Sections of the film pass with little dialogue but they are still rich with the sounds of babbling brooks, wind in the trees, and footsteps in the fresh snow. By the end of the film, David, indeed, walks like a man.