Corporate horror/comedy is his most personal film to date 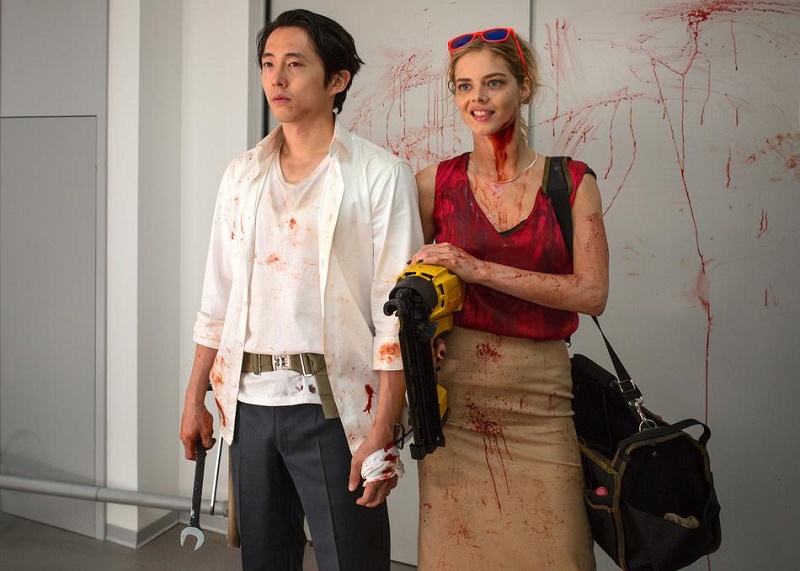 Joe Lynch doesn't make introspective films. He makes movies about inbred hillbillies (Wrong Turn 2: Dead End), and crazed gangs (Everly). So he's as surprised as anyone that Mayhem, his new insanity burst about corporate culture gone bug-eyed haywire, is his most personal story.

In hindsight, he said, "I got out a lot of demons with that movie. Not all of them, but a good, healthy amount of them."

Get ready for a reality check: It's not all wine, roses, and limos for indie filmmakers. "It's one of those fallacies that you get force-fed, when you're a filmmaker-to-be, when you're a kid, and you keep hearing about studio deals and bungalows and huge residual checks, and you go, 'Well, that's how people are able to sustain themselves between projects.'"

Instead, Lynch described himself as working "in corporate hell. … When reality strikes, and you go, 'Oh my god, I'm a filmmaker, yes!' and then you realize that it's a lot harder than you think, and the world doesn't just open up for you." Even after the success of Everly, which took years to get off the ground, "I couldn't sit on my laurels and go, 'Something's gonna happen.' I have two kids, I have a family to support."

Not that he was complaining too hard. "I like to work," he said. "I need to have things to do, or I feel incredibly flustered, both emotionally and creatively." A blue-collar kid from Long Islan, the son of a successful small businessman who built his own auto-customizing store, Lynch said, "I just knew you always had to work." Not that he didn't know he wanted to work in film, right back from those days working in his dad's shop. "I'd be sitting there, stuffing Fanogoria magazines into the catalogs, so he'd be like, 'Find out how much the tires on a Jeep Wrangler are,' and I'd be going, 'Oh my god, the new Evil Dead movie looks so good.'"

His grownup corporate gig may not have been great shakes, but it paid the bills, and allowed him time to work on developing projects. That's when Matias Caruso's script for Mayhem barrelled into his life. Lynch said, "Immediately, I knew I had to tell this story."

Imagine a virus that unleashes the id and turns people into instinct-driven maniacs. Now imagine that it's not deadly, and it is curable, but while you're infected you're not legally responsible for your actions. When screwed-over corporate lawyer Derek Cho (Steven Yeun, The Walking Dead) finds out his entire office, including himself, has been infected, he realizes he has a narrow window of opportunity to set the world to rights and settle a few scores in the process.

Unleashing a hammer-wielding Yeun and a nail-gun-toting Samara Weaving (Ash vs. Evil Dead) on a building full of bug-eyed corporate drones sounds like reason enough for Lynch to tell his bosses to take his corporate job and (very politely) shove it.

The more personal inspiration was Bobcat Goldthwait, a personal hero and now close friend, "which trips me out," said Lynch. "He told this college graduating class – and he did this article about it too – about how the best advice he gives people is to quit. The reason why this is is this: If you're doing something that you don't want to do, or you're doing something that is giving you a level of success, but it's not creatively fulfilling, or it's not filling a live void, and you don't sleep at night, because you think, 'This is what people have told me is successful, or this is what my parents have told me is successful, or this is what life has told me is successful. Why don't I feel right?' So he said, 'I quit. I quit the business of acting in movies, and doing that persona, to pursue something that I truly love, which is directing. That's where I am today.' And yeah, he may not be making $50 million movies, but he's making movies that matter. He's making movies that he can sleep at night. That was so inspiring, and then I read the script and went, 'This is Bobcat's whole thesis, built into a movie, and it just so happens to have ultraviolence in it. Sign me the fuck up.'"