Some go-go, some Baduizm, even Shaolin mastery

On a night billed as a D.C. showcase, Chocolate City go-go legends Rare Essence set an awfully high bar for the bigger names that followed. With more than 15 members onstage, the 40-year vets delivered a master class on call-and-response syncopated funk jams with honorary member DJ Kool (“Let Me Clear My Throat”) serving as MC.

Wale jumped aboard to drop bars and gush about his hometown heroes.

“This is D.C. history right here!”

Thievery Corporation arrived a well-oiled machine, hitting the stage at the stroke of midnight and playing precisely 60 minutes of deep hypnotic grooves. Brainchild of crate diggers Rob Garza and Eric Hilton, the Washington collective has mastered the art of marrying downtempo electronica with global grooves over the course of 10 LPs and 21 years. The live fivepiece backed a rotating parade of vocalists and longtime collaborators, including sometimes Austinites Natalia Clavier (Echocentrics) and Loulou Ghelichkhani (Bone, Fur & Feathers), who both have a knack for completely melting into a song.

Boston rapper Mr. Lif spit political on “Ghetto Matrix” and “Fight to Survive” from last month’s Temple of I & I, while Ras Puma embodied the album’s deep reggae roots. 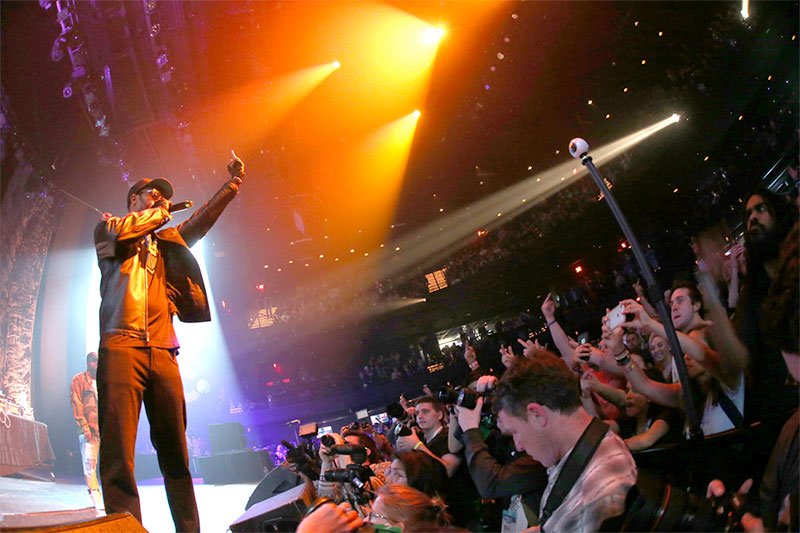 Wu-Tang brought the rawkus – not always a given these days – and earned a passing grade for attendance. Ghostface skipped and Method Man went missing despite a local billing later this week. Otherwise, Shaolin’s finest functioned at impressive efficiency and if there was any slack, Meth’s blunted bestie Redman was there to help “Pick it up, pick it up.”

In the end, gonzo soul goddess Erykah Badu, who DJ’d a 15-minute set earlier in the evening, stole the show with the apropos jazzy “Afro (Freestyle Skit)” from Baduizm.

“Well, you said you was gonna take me to see Wu-Tang, baby, so I braided my hair/ Well, you changed your mind and said we wasn’t going, but my mama saw you there.”