A certifiable legend in the extreme metal universe, North Carolina native David Vincent fronted and played bass for Morbid Angel on and off for the better part of the last three decades until 2015. His new local project offers something else altogether. 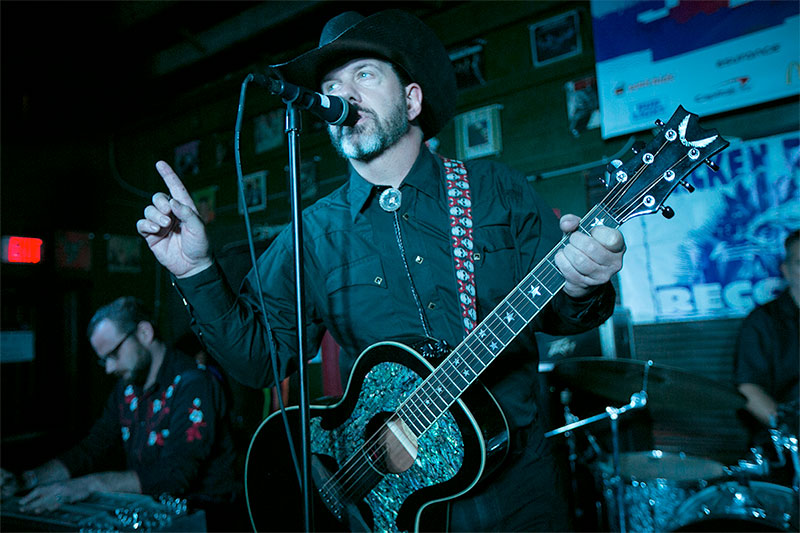 Backed by certified ATX country legend/drummer Tom Lewis of the Wagoneers and Heybale!, and rockabilly great Danny B. Harvey (Lemmy, Wanda Jackson, Nancy Sinatra) on guitar, the new live music capitalist wasn’t fooling around Tuesday night at Valhalla on a showcase for local imprint Chicken Ranch Records, which just issued a 45 by Vincent.

His deep voice out front of a band that also included stand-up bass and pedal steel laid out a brand of hard outlaw country that varied from a stomping take of Merle Haggard’s “I’ll Just Stay Here and Drink” to a tantalizing version of Johnny Cash’s “Big River.” Mixed in were heavy duty originals like “Drink With the Devil” and “Buyer Beware,” both from the new single.

There floated a few references to the devil and Hades that brought to mind his roots, yet also recalled modern country rebels Hank III or the Waco Brothers. Vincent’s band could also do twangy, smooth, and energetic just enough to recall Austin’s gleaming Derailers. Sadly, Valhalla isn’t the Broken Spoke and the black leather crowd wasn’t about to start two steppin’.

Nevertheless, this homegrown, black-clad quintet wouldn’t have been out of place filling in for Dale Watson at the Continental Club. The set ended with a broad smile crossing Vincent’s face, one that showed, naysayers be damned, he was rightly satisfied with what had been accomplished.