A grieving millennial goes on the road again

Twenty minutes into Ramblin’ Freak, I was ready to write off the documentary – Parker Smith’s feature-length debut after directing videos for local bands in Austin – as a lo-fi narcissist’s meditation on white privilege and cinematic obsession. Then, out of left field, came the most hypnotic, disturbing montage from any film I’ve seen yet at the Festival. 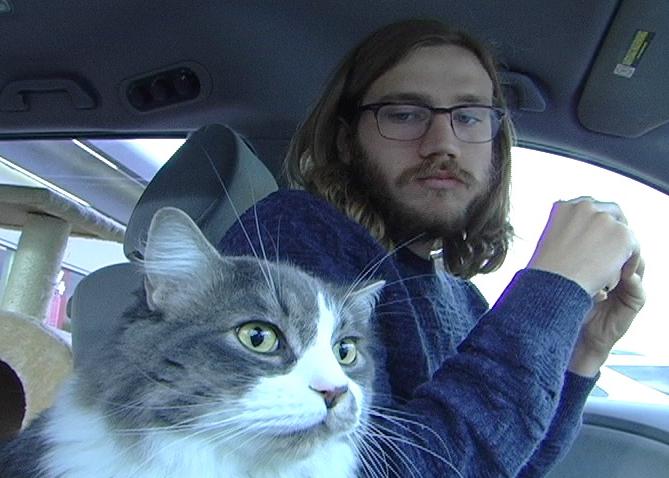 While I will not reveal what this sequence depicts, I can say that it presents a metaphor for the fears and self-immolating desires of a man in mourning. Belgian film director Chantal Akerman approached the very same subject in her final film, No Home Movie, with a parallel mix of personal and found footage. And following this sequence, Smith’s film becomes a more explicit homage, exploring the nature of his recent off-camera tragedy while on a peculiar physical journey. In real life, the director ordered personal Panasonic cameras on eBay and a few portable tripods in the hope of capturing his travels as they happened. From there, he drove from Texas to New York to visit another tragic character, a disreputable body-builder referred to here as “The Man Whose Arms Exploded.”

Before Smith reaches the East Coast, Ramblin’ Freak plays like a numbed-out Easy Rider, with only a cat named Cat to keep the filmmaker company. But as an editor, Smith displays a quiet knack for story that reveals itself only after he meets the body-builder under the auspices of an interview. Scattered amongst clips of YouTube tutorials and low-budget workout videos are signs of the filmmaker’s immense, unspoken trauma. The gregarious iron man is all too willing to participate.

The final reveal strikes unexpectedly at the heart, considering this film’s distant, almost avant-garde style. For Ramblin’ Freak, the metaphors are instrumental in understanding both “Parker Smith” and Parker Smith: one, an aspiring artist coming to terms with his driving addiction; the other a sensitive editor questioning the worthiness of his onscreen creation. Few artists of Smith’s age (he is 24 in the film) investigate their inner worlds with the flexibility of mind and vision demonstrated here, and it is a rare thing indeed to be able to see such work outside of a museum. Ramblin’ Freak may be destined for one ultimately, so I consider myself lucky to have seen it in a theatre.