"It Began Without Warning" at SXSW 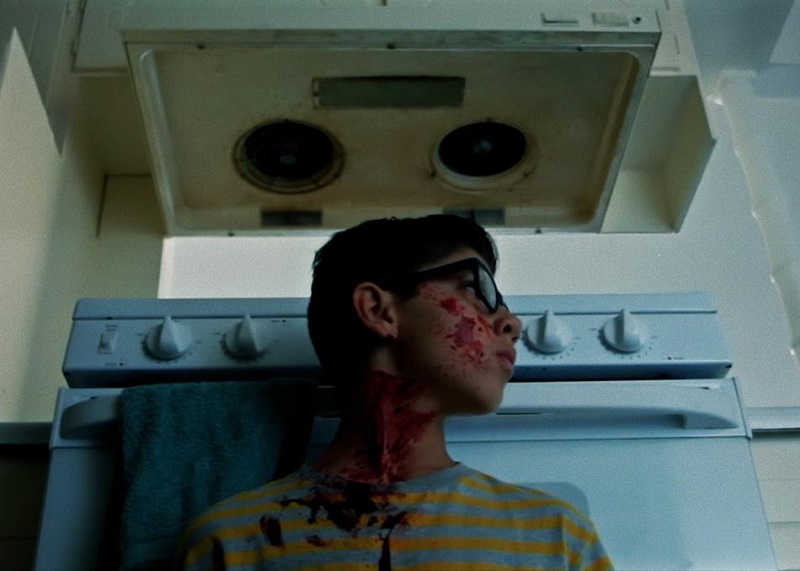 "It Began Without Warning," part of the SXSW Midnight Shorts

"It Began Without Warning" may be short, but its five minute runtime is enough to catch the audience unawares. That's exactly the plan, said Jessica Curtright. "We like to start where you think you're in one genre, and then suddenly you're not."

Along with Santiago C. Tapia, Curtright wrote, produced, and directed the mini-horror ("The only thing we don't do is act, thank God, because that would make our shorts awful," said Tapia), which creeps into the SXSW Midnight Shorts programming.

The Boston-based duo admit they're an unlikely combo: when they met on the subway, she was studying theatre, and he was in pre-med. Curtright said, "He's the oldest of three boys, I'm the youngest of three girls. I'm left-handed, he's right-handed. But we both were interested in film, and we wanted to make films together."

"We had a passion for the same things," said Tapia. "Stephen King, Twilight Zone, movies by John Carpenter, David Cronenberg."

All those elements are on display in "It Began Without Warning," as well as nods to the pitch-black social indictments and ghoulish horrors of Stuart Gordon: a suitable comparison, since Curtright and Tapia work as a two-headed beast. Stealing a trick from the Coen brothers, they use one computer and two keyboards while they're writing and editing. "We create through conflict," said Curtright, "because we see things so differently. Basically we're saying we're codependent, and it's really unhealthy and inefficient. But if we both can agree on something, we know it's good."

In fact, Curtright and Tapia think "It Began Without Warning" is good enough that they have a full feature idea to spin from this self-contained proof-of-concept. They already have a world guide ready, and rather than give the cast a full script, they used that as background material to explain the story to them. Curtright said, "We usually don't do it that way, but we kept telling it to the actors and the kids' parents, to get them involved."

Tapia added that the plan was to make the actors "seem more natural and into it. It's almost like when you do a found-footage movie. Obviously, they need to be scripted, but I've heard certain directors say that if they give a found-footage script to actors, it's very hard to act it out without it seeming stale. So oftentimes, they'll either try to keep that script away from them, or write it in such a way that the actors can hit the exact lines, but improv it."

The pair already have powerful eyes on them. Blumhouse Productions president of feature films Couper Samuelson and actor Efren Ramirez (Crank and Crank: High Voltage) signed on as producers, while they've had support from Lights Out director David F. Sandberg (in town to preview Annabelle 2, whose progression from shorts to features inspired the duo. "When we saw what he did with Lights Out," said Tapia, "it gave us the ability to go, OK, let's do something like that."