Sansa or Arya? The truth comes out at the panel for the popular HBO show.

On a cloudy Sunday, SXSW audibly wondered if their Game of Thrones showrunners panel would break the Festival. 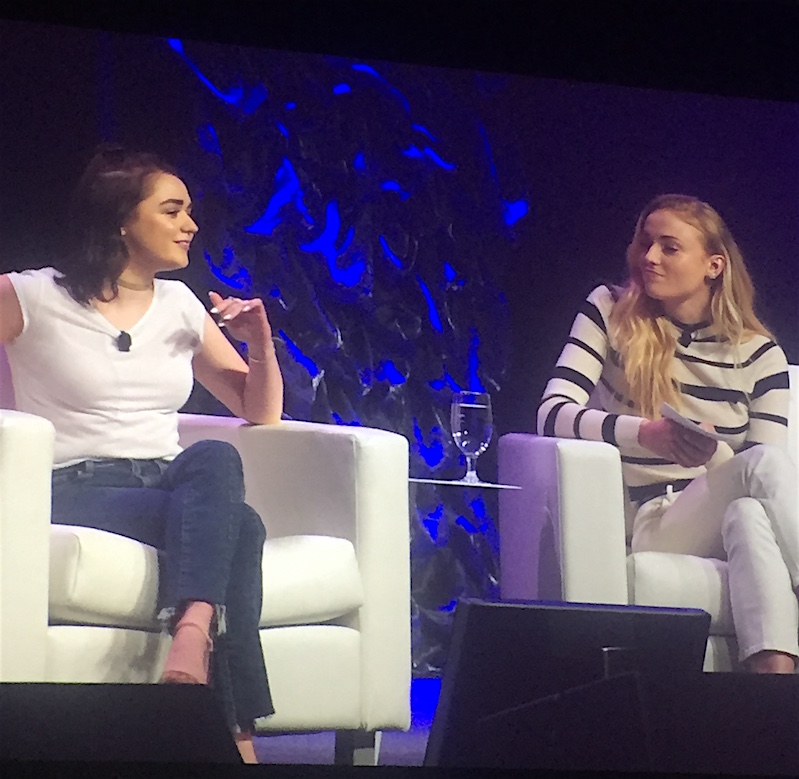 An hour before co-creators David Benioff and D.B. Weiss, along with stars Sophie Turner and Maisie Williams, took the stage, people were scrambling into the room even while former vice president and fan favorite Joe Biden was speaking two floors down. Starting 10 minutes in, it took no time for Turner and Williams to own their moderator roles, asking Benioff and Weiss, “Who do you like better?”

“No, not Arya or Sansa, which one of us?” The creators chose Williams in response to Turner’s spot-on British sass, but Benioff revealed he’s always gravitated toward Sansa. “Arya is a rebel. People like her. But Sansa, to be honest here, even book readers always hate her character. But I thought she was more like a real person. She goes on one of the best journeys.”

Weiss echoed those sentiments: “Sansa faces harder choices and that makes her feel more real – you resonate with her more. Arya makes the badass easy choice. Initially she was ‘the fun sister’ … but they’re probably equal now.”

Sansa’s arc has not just resonated with audiences. Turner confessed during the Q&A portion of the session that her proudest moment on the show came after the season 5 episode where Ramsay Bolton brutally rapes Sansa on their wedding night. The episode sparked outrage among viewers and prompted some much-needed conversations on sexual assault. “I’m proud about what [that episode] brought up about rape and the conversations it started,” said Turner. She credits that experience for turning her into a sexual assault advocate.

While spawning quite the cult following, Thrones has received intense backlash regarding the show’s treatment of women – particularly the recurring, gratuitous rape scenes. Even after season 4 was spent humanizing Jaime Lannister, Benioff and Weiss wrote a scene where he rapes his sister/lover, Cersei. Yet, to this day, Jaime is still depicted as a rootable antihero, Cersei’s rape notwithstanding. If the show helped make Turner an advocate against rape culture – it’s the least it could do.

Another audience member asked how Benioff and Weiss believe GoT has impacted the portrayal of women on television. Both fell silent, save a few back-and-forth “umms” and “ahhs.” Finally Benioff admitted he didn’t know. “It’s a big question. We could’ve spent the whole hour on that one.”

“It’s an awful world in which this story takes place,” Weiss chimed in, managing to talk around the question. "Some of the most compelling characters – even in the book – are women. We knew it would be a very actress-centered show before it even started.”

Of course, both Benioff and Weiss came across as nice, cool guys with a good self-deprecating humor. And the four of them – Turner and Williams sporting matching tattoos of the date they were officially cast for the show – interacted like family, the girls referring to the guys as their “fun uncles.” That family vibe seemed to extend to the greater cast as well.

“I’m happy we kept everyone together – partially because you all get paid so much,” Benioff joked when thinking about his proudest moments. “It was always one story. We pitched it to HBO wanting to tell one 70 hour movie [it’ll actually be 73 hours], and I’m glad we kept the core together.”