SXSW Film Review: This Is Your Death

Would you kill yourself on TV for money?

Over-the-top satire and gratuitous bloodletting are the real stars – and perhaps Josh Duhamel – of Giancarlo Esposito’s timely (what isn’t these days?) film This Is Your Death. 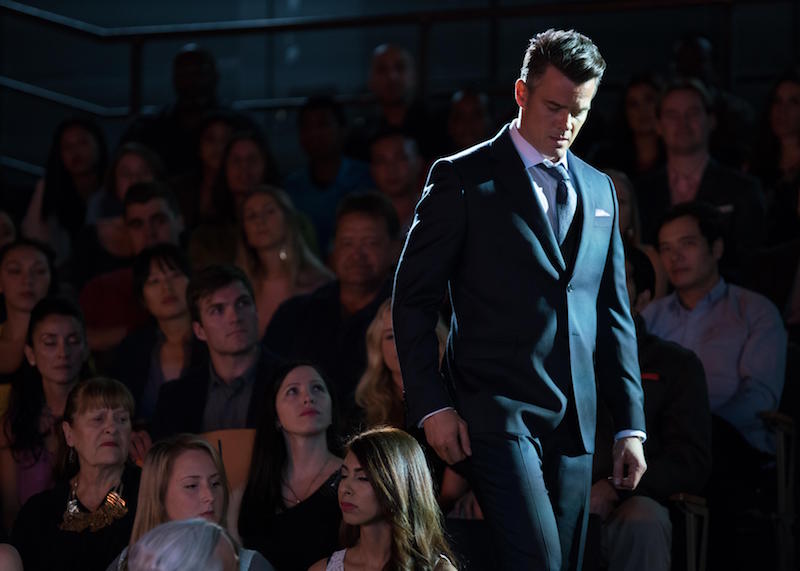 In the Q&A session after the screening, Duhamel (Las Vegas, All My Children) said a plain truth: “We have a president who is a reality TV star. We aren’t too far away from this story being real.” This story is kicked off by superstar TV host Adam Rogers (Duhamel) witnessing death on his Bachelor imitation show.

Borrowing liberally from the British hit Black Mirror and Paddy Chayefsky’s 1976 classic Network well of dystopia, the film has Rogers spurred by an oxymoronic need for realness and “empathy” in a TV show. He and ruthless producer Illana (Famke Janssen) commence to create suicide TV, brought to you by class warfare, emotional despondence, and a popular soft drink.

Placing the obvious philosophical hypocrisies aside, the film’s ultimate issues lie in motivations, the film’s and each of the characters. The film’s general assumption, going with Duhamel’s Q&A point, is that people would watch a show about people killing themselves, without an iota of self-consciousness about it. It’s laid out as a baseline, as if the needle of America’s moral compass has stuck red, directed to bloodlust. Suspension of disbelief is made more unlikely by the characters’ first-world desperations. For example, Mason (Esposito), one of the contestants, believes himself in dire financial straits, which could be at least partially alleviated by simply ridding himself of the house he’s trying desperately to maintain. Yet, we’re to believe in the leap he takes: considering violently killing himself on live TV for money, without contemplation of a myriad of potential complications. Rogers himself turns bloodthirsty, seemingly to continue his nonsensical quest, brought on by greed and probably PTSD. If allowed to do so, the film has bite – less rabid pit bull, more slow-walking, armless zombie.

This Is Your Death