Lesbian romance films are often a joke even among lesbians. They’re so frequently over-the-top, poorly written, and about as basic as avocado toast, that relatability and true-to-life representation gets lost. 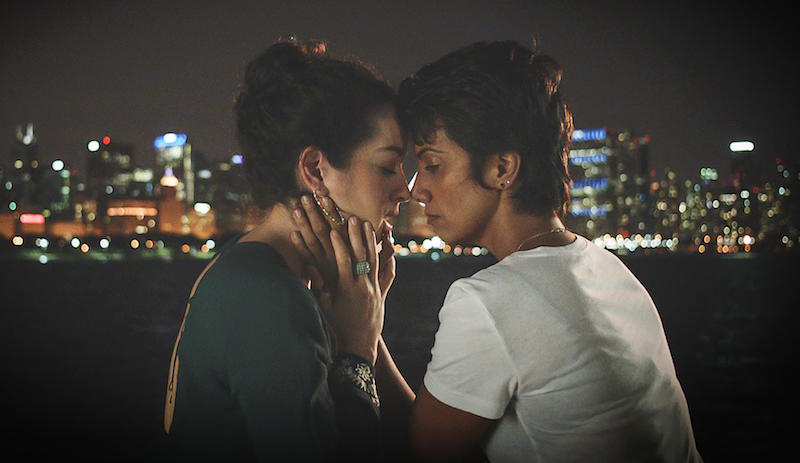 While Signature Move, directed by Jennifer Reeder (White Trash Girl, A Million Miles Away) and written by Lisa Donato and Fawzia Mirza, falls into some of these queer movie traps, it’s not quite as basic as the typical lesbian love story. Mirza (Her Story) stars as Zaynab, a Pakistani lawyer whose recently widowed mother (Shabana Azmi) has moved in with her. Set in Chicago, Zaynab – who’s had sex with four women, dated two, and loved zero – soon meets Alma (Sari Sanchez), a Latina bookstore owner, over shots of tequila. Love and relationship drama blooms.

Zaynab is not out to her mother, and while this is not a new story, the characters are. We watch Zaynab grapple with universal mother/daughter issues, but also more nuanced cultural issues. Her mother doesn’t seem homophobic, but she’s also clearly uncomfortable when she spies her next-door neighbor kissing his boyfriend. Zaynab – who quietly wishes to be out – does not trust her mother to accept her queerness.

Alma is different. Her queerness is openly acknowledged and accepted over family breakfast tacos. And the relationship she and her mother share is in clear opposition to Zaynab’s experience. Not only is Alma close with her mother, the two are friends.

Of course, the title refers to a wrestler’s signature move and – be warned – wrestling, specifically Mexican lucha libre wrestling, is a slightly disjointed theme throughout the film. Maybe for those better versed in Luchadora culture, the random wrestling tidbits wouldn't feel so forced, but they successfully add a bit of that over-the-topness to the film.

Yet Signature Move never attempts to take itself too seriously. And the relationship between Zaynab and Alma is both believable and likable. Viewers will root for them. Perhaps because Mirza not only stars in the film, but also co-wrote it, Signature Move also shines a small, but much-needed light on non-white queer love. That, in and of itself is rare, because like the majority of Hollywood stories, the lesbian genre is typically filled with white girls, long hair, and too much makeup. Rarely, if ever, do queer women get to see films starring multi-dimensional Middle Eastern and Latina characters. It's a refreshing reminder that queerness not only lives, but thrives in all cultures.