The satire is turned up to high, as a talented but neurotic writer (Wyatt Cenac) tries to find himself and escape the shadow of his successful writer wife (Greta Lee) in the world premiere of Laura Terruso’s directorial debut, the dazzling and sweet comedy Fits and Starts. 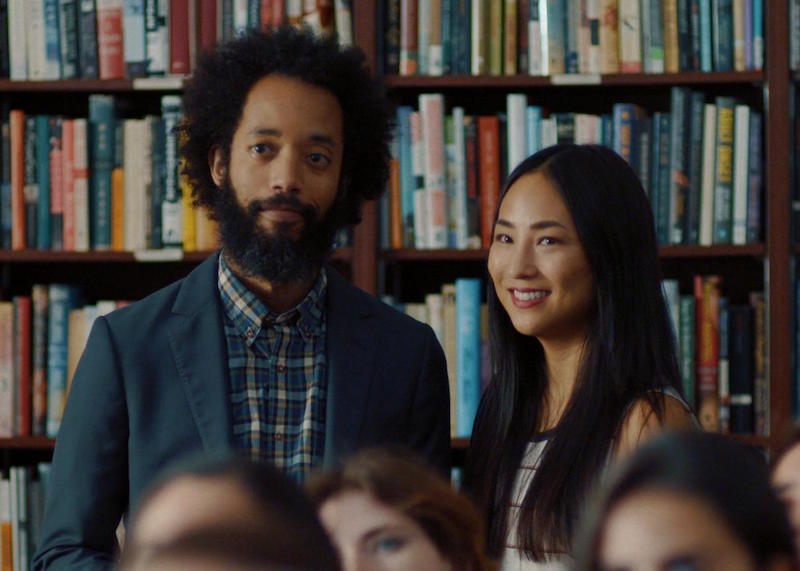 Known for his Daily Show and King of the Hill exploits, and his starring turn in Barry Jenkins’ cult classic Medicine for Melancholy, Cenac’s dry humor and nerdy charm are on full display as David, who is years into the process of writing his first novel. Meanwhile, his prolific wife Jennifer (Lee) has just released her second well-received novel, which no one in their literary circle will let David forget, if they remember him at all. The couple is encouraged to attend Jennifer’s publishers’ salon retreat, where David might finally spread his wings, and perhaps find readers for his work. In the course of just getting to the house, the loving couple brings some personal entanglements to light – namely David’s reticence and Jennifer’s perceived lack of support for David’s work.

The smart script by writer/director Terruso (who co-wrote the script for SXSW ’15 alum Hello, My Name Is Doris, based on her original short film) dials up the hijinks. The salon becomes a culture critic-centric satirical house of horrors, one that Terruso evocatively invokes: the snobby publishers’ wine takes, the expressive dancer, various dream-killer no-talents, a visual artist with mommy issues. Fits and Starts ultimately glows through Cenac’s unique charisma, and his special chemistry with Lee (High Maintenance, St. Vincent, Gemini). It’s clear from this film that Cenac could be a film star, if only that were his goal. He admitted in the post-film Q&A, “I don’t do a lot of movies. It’s probably not the best place to say this: I don’t enjoy doing them, no offense.” Of course, because it was hilarious in how he said it.