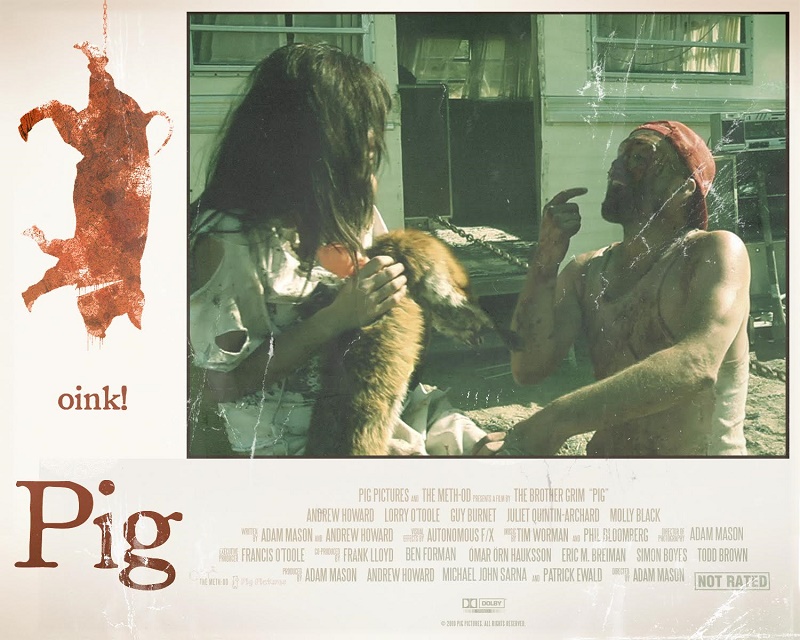 Poster for a film that (almost) doesn't exist: Adam Mason's radically divisive and elusive Pig makes its theatrical world premiere and only screenings ever this weekend at SXSW.

Horror fans at SXSW get spoiled this year with three retrospective screenings. There's a classic in Alien, and a cult favorite in Behind the Mask: The Rise of Leslie Vernon. But few titles are more shrouded in mystery and lore than Pig, the extraordinary and near-mythical extreme horror explosion from Adam Mason.

This is a movie shown at a few festival, then streamed once through horror websites in 2009, and never seen since. What the audience endured was a grueling and gruesome 90 minutes in the company of a monster, defined by one chilling line: "We're so sorry, but it's so much fun." The only known copy was on a hard drive in Mason's garage, and at this SXSW it will re-emerge for two screenings, and then basically disappear forever.

Pig was born in part from Mason's frustrations with how his previous films had suffered during distribution. "The only one I would have made any money on was the first one (2000's The 13th Sign), and then I got divorced from my wife, and she took all the money. I think I have yet to make a dollar from any of them."

Many of these films had been collaborations with his leading actor Andrew Howard (Agents of S.H.I.E.L.D., Bates Motel). Mason said, "The creative side of making them was very pleasurable and rewarding, but we would always get completely screwed over at the final hurdle of getting them seen and released."

In 2009, his personal favorite film, Blood River, was caught in limbo because of a fight between producers. This left Mason, who had only recently moved to the U.S. from his native UK, broke, isolated, "and living like a student," he said. "I found myself getting increasingly angry, without anything to do with the anger. I had nowhere to put it." So he and Howard decided to take matters into his own hands. "We'd decided to make a movie that was pure horror, with a satirical edge to it."

This wasn't just a run-and-gun purgation, with gore and ichor to appease the audience. It was a way for Mason to examine his own contradictory feelings about the genre, with which he has a love/hate relationship. "I wonder what it is that makes people want to watch certain forms of horror. I'm a big fan of the French New Extremity, but I do wonder about a movie like Inside. As much as I enjoy it, where is the enjoyment coming from, and what does that say about me?"

So was born Pig, "the absolute gutter version of that kind of film. We threw away any idea of having any script or a story. Any character arcs or things you might read about in a Syd Field book, went out the window. We just focused on the lowest common denominator of what a film like that would be if it had no regard for the things that people view as decent entertainment."

This is horror redux: a two-day, $3,000 exercise in brutality, all in one single shot so the audience never has an opportunity to look away. "It was like Frankenstein's monster. Because it was all improvised, none of us knew where it came from, and because it came from such a dark place in our personal lives, it became this monster. Once we'd finished it, we couldn't quite believe what we'd made, and felt a peculiar distance from it."

And that was going to be the end of it. Mason had no reason to expect anyone would see it again. Then in 2015, his flesh-crawling home invasion horror Hangman played in the SXSW Midnighters, and Pig came up in conversation. "The next thing I knew, I got a letter saying, 'Congratulations, you've been accepted by South By.' So next thing I had to do was see whether it still existed."

The timing was beyond fortunate. Mason found the film on two hard drives in his garage, which both exploded after he pulled off the files, and then his garage flooded soon after. The movie saved, Mason undertook a remix, to bring out some of the political themes. So nearly a decade after it was last seen, Mason regards these last-ever screenings as more pertinent than ever, due to "the blatant misogyny that is going on in the political world, and in the media, and Pig is deeply about those things."

The retrospective will be both a first and a last, since this will be the first time Mason will have seen it on a big screen, with an audience, and he will get to gauge their response. It'll be an odd experience for the filmmaker, who has moved far beyond the the anger he felt that the time, and is now a father of two (with a third on the way) with a successful writing career. He said, "Some people think it's a classic, and some people think it's a repugnant waste of time, and I kind of agree with them, in a way. I don't really know how I feel about the film. I am proud of it, and in other ways I'm mortified by it."