Save the World With Bill Nye

SXSW Eco closing speaker thinks we're not a lost cause 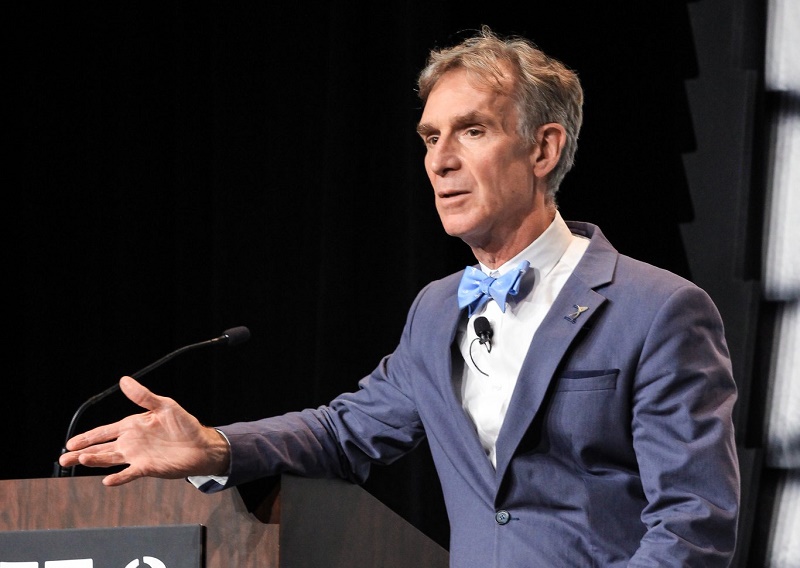 "This should not be a political issue. It's just an issue." Bill Nye the Science Guy on the need for policy consensus on the environment. (Photo by Benedict Jones via SXSW)

If there was one takeaway from Bill Nye's closing keynote speech at SXSW Eco, it's that it's up to us to save the world. The good news? The Science Guy thinks that's eminently doable.

Conferences should be about unique events, like Eco head of programming Carolyn Harrold being one of the first people to eat a new, GMO, non-browning apple. "Another one of those opportunities," she said, "is introducing Bill Nye today. The best part of it, unlike this apple, is that we get to share it with you."

There haven't been many truly iconic advocates for science in the last century: Einstein, who re-wrote our operator's handbook for the universe; Goodall, opening our eyes to our closest relatives; Feynman, who melded physics with beat poetry; Sagan, the godfather of modern cosmology, and his heir-apparent deGrasse Tyson; Attenborough, who basically invented the contemporary nature documentary; and Nye, who blew the hinges off the classroom door.

At first glimpse, he is the clown prince of science. The blue jacket, the trademark bow-tie, the easy sense of humor: "Somebody asked me, 'Is Bill Nye your real name?' Yes, well, it's William Nye. 'Why did you change it?'"

But he's never just been about science for science's sake. As the stakes get higher on global warming, he told the audience: "I want you, and your students to ... how do I say this? Change the world."

Think of the problem as an equation. There are certain constants, such as the Earth's atmosphere being so thin, you could drive through it in an hour. ("The way they drive in Texas, 40 minutes," Nye mugged to the audience.) Then there is a variable seemingly out of our control: the massively expanding human population. Nye recalled visiting the old Times Square population ticker just after it passed 3 billion; now it's 7.3 billion, rising to 9 billion by 2050. There's a reason the equation must be solved: 2015 was the hottest year on record. ("People in my little climate world thought 2016 would be cooler, by a little bit, but that's not happening.") Put that all together and Nye presented a simple, if huge, problem: "The atmosphere is very thin, and there are seven-and-a-half billion people burning it and breathing it as fast as they can."

So what variables can we control? First and foremost, human behavior. Nye said, "You could run in circles screaming – blaaaaaaaaaaargh – but that's proven to be ineffective." So, he said, "I submit to you that, if we just get to work, we can save the world." Nye posited the well-established and verified model that, by 2050, renewables could produce all of the energy needs of the world's biggest nations. In Texas alone, that investment could produce 300,000 jobs. "That's three Dallas Cowboy games," said the scientist, hardly exact in his calculations.

In his hour-plus presentation, there was one underlying theory: If the United States treated climate change as the same existential threat as the attack on Wake Island, or 9/11, these problems would be soluble.

This should be an easy sell, but there's been a big problem. Environmentalists have been really, really bad at getting their message out in a way that connects with the average person. By contrast, he said: "The climate change deniers have been so successful." Case in point: He had to debate with Ken Ham of evangelical anti-science cranks Answers in Genesis USA, who claims that the world is 6,000 years old. "No, it isn't," Nye said bluntly, but the problem is that there are voters who believe this bunk, "and they're raising a whole generation of kids that believe all this." They're voting in people like Florida Governor Rick Scott (who just got washed out by Hurricane Matthew), who won't allow his staff to even mention global warming, "and your own beloved Ted Cruz." As for Donald Trump: Nye says the Republican presidential candidate "believes that climate change is a conspiracy backed by the Chinese."

But Nye, ever the optimist, ever the cheerleader, reminded the crowd that this isn't a left versus right issue. Even Arnold Schwarzenegger, who he called "very, very conservative," took on climate change as a policy issue when he was governor of California.

It's hard to claim fiscal conservatism without conserving the environment on which the whole economy is based. In other words, you can't invest in grain futures if the Midwest is a dust bowl.

Take the Paris Climate Change Agreement: While Nye found its numbers to be milquetoast (a byproduct of this being a consensus document), it's something on which every nation can agree to sign. So while he could and did critique its numbers, at least it's only the numbers, not the general concept of human-made global warming. That's a massive step forward.

"This should not be a political issue," said Nye. "It's just an issue."