SXSW Film Review: I Am a Hero 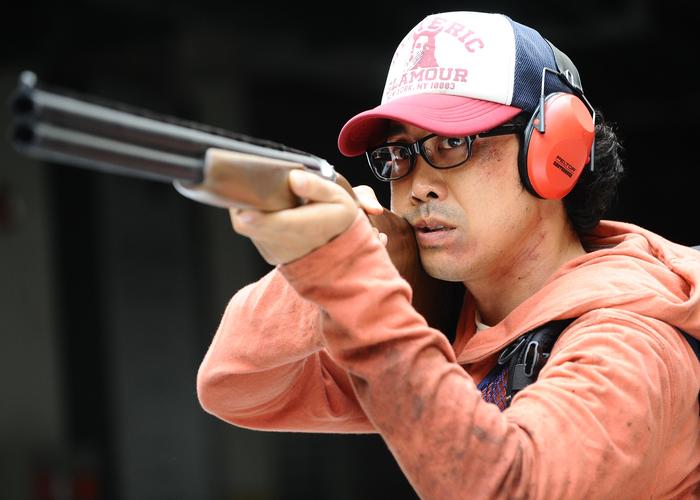 Sometimes it's difficult living up to your name. Especially when your name is an ideogrammatic pun that really doesn't translate well.

That's a core joke in I Am a Hero, Shinsuke Sato's adaptation of Kengo Hanazawa's epic zombie manga, and winner of the SXSW Midnighter audience award. Hideo (character actor Yô Ôizumi, probably best known for his voice work on animes, including The Boy and the Beast) is a nobody, an assistant artist on a manga. Ever wondered who it is that slaves away on drawing all those architecturally detailed backgrounds in those comics you love? It's people like Hideo, whose only claim to fame is that his name (when spelled out in kanji) uses the same letters as hero.

Of course, he's far from it. He's a daydreamer whose tedious job means he never has time for his girlfriend (Miho Suzuki), his ambitions to draw his own comic, or even his hobby of skeet shooting. Then the zombie apocalypse comes when the ZNQ virus starts turning everyone into flesh-hungry monsters. Is it time for Hideo to become the hero his name promises? Eh, not so fast.

The script by Akiko Nogi (who co-wrote Library Wars for Sato) adapts the narrative thrust of the first half of Hanazawa's 18 volume series, while pulling back on some of the heavier supernatural elements. That's probably to its benefit, because Japanese horror, when it delves into the minutiae of its rich mythology, can be a turn off for foreign audiences. Again, that's part of the joke. There's little doubt that Nogi understands that: one character even has a lengthy and pointed opening speech that, of all Japanese cultural endeavors, only manga has been successfully exported.

The opening hour is Sato and Nogi's ingenious riff on the zombie trope, cycling the gun-hungry habits of American undead horror with the firearms-averse culture of Japan. He even keeps one of the core gags of Hanazawa's story, that Hideo is so determinedly law-abiding that he refuses to use his shotgun. In fact, it's Ôizumi who really sells that hour, making Hideo a lot more than the useless goof that horror films like their everyman character to be.

It's the second half that seems oddly laggy. Not "will we ever get off the farm in The Walking Dead?" laggy, but it often lacks the quirky and personal charm of those opening sequences. However, it delivers in the final lunatic pay-off, in which Hideo finally decides to live up to his pun of a name.

I Am a Hero