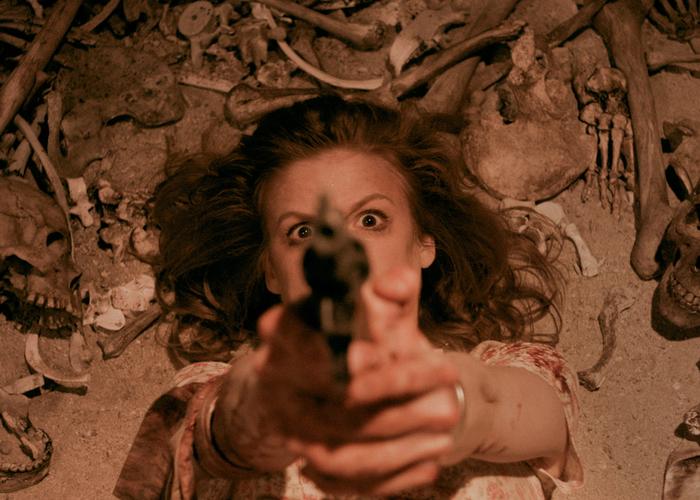 Locked and loaded for hell: Ashley Bell takes a trip to Carnage Park for SXSW.

Another film festival, another Mickey Keating film. The only working director to give Sion Sono a run for his money on both quality and quantity of titles, the enfant terrible of American genre cinema has gone back to the desert for his fourth feature, Carnage Park.

After the icy New England horror of SXSW 2015 hit Pod, and Fantastic Fest 2015 psycho-horror Darling, he goes back to his dusty road trip roots of 2013 debut The Ritual.

It starts like a period Western noir: Somewhere in rural California in 1978, Vivian Fontaine (Ashley Bell, The Last Exorcism) is tied up in the back of a car, taken hostage by two bankrobbers, Scorpion Joe (James Landry Hebert) and Lenny (Michael Villar). But when they wander onto the land of psychotic sniper Wyatt Moss (the ever-adaptable Pat Healy, in yet another chameleon performance), everyone's plans quickly go to hell.

There's a sense that Carnage Park is a do-over for the low-budget freshman limitations of The Ritual. But there's a lot more at play here, not least that Keating has evolved so much and so fast that it's hard to recognize this as the work of the same director. And while Darling was an outright Polanski homage, this is a breakneck thrill ride through American horror's greatest hits.

There are a thousand references to the golden era of exploitation, starting with The Texas Chain Saw Massacre and My Bloody Valentine, with equally clear nods to acolytes of the genre like Quentin Tarantino and Rob Zombie. But Keating is a hell of a lot more than just a mirror or a greatest-hits reel. Those trademark Keating beats (storytelling with a madman's rhythm, created in close collaboration with regular editor Valerie Krulfeifer) add a febrile insistency to the insanity.

He's also never been more assured as a director of actors. Healy is, yet again, a force of nature, as menacing with a rifle as he was with a phone in Compliance. His bombastic malice is balanced perfectly by Alan Ruck: A great character actor increasingly showing his aptitude for horror, he brings tragedy as the sheriff with a nightmare factory in his backyard. As for Bell, she turns the final girl trope on its head by taking it straight back to its roots.