“The people in the fancy seats can just rattle their badges,” winked guitarist Yonatan Gat near the beginning of his trio’s powerful SXSW set Friday night. Rest assured the Tel Aviv native and former axe god for Monotonix, which played legendary SXSW sets, wasn’t being off-putting. 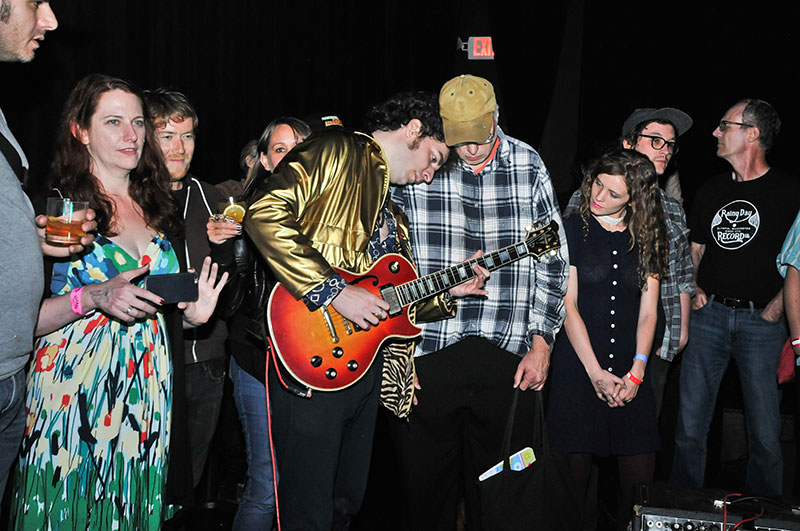 Indeed, he and his band set up right in the middle of the floor of the nearly opaque back room at the Townsend – playing with the audience instead of for them. After a crowd member’s brief poem entitled “Yonatan Gat #5,” its subject led off with a spiraling guitar line hinting at the African acid blues of Tinariwen and Bombino. Then the bass and drums charged forward, adding the kind of drive associated with heavy psych bands like Earthless. Eschewing any effects that weren’t already on the amp, Gat’s drillbit picking kept the second number barreling at unsafe speeds, which his posse was more than happy to emulate. The third song crashed out of the gate on the back of a drum solo, indicating another ripper, but then Gat surprised with lighter, airier riffing, proving himself as comfortable with subtlety as with bombast. Of course, the song eventually rediscovered its amphetamine stash and the tornado touched down once again.

The fourth song revisited that light approach, with jazzy drumming and poppy guitar lines, but the fifth and final tune was the trio’s most overtly rocking excursion. Gat drove the music into the realm of (barely) organized noise, before abruptly stopping – victim of a late start and truncated set time.