“Hey, we’re Beach Slang, and we’re here to punch you right in the heart.” Bandleader James Alex was right to warn the crowd before launching into the quartet’s emotive – emphasis on “emo” – breed of pop-leaning power punk.

“Noisy Heaven” commenced the Philadelphians’ 30-minute set at Lady Bird Lake’s Outdoor Stage on Friday, that moody rock cut from the foursome’s debut LP, last year’s The Things We Do to Find People Who Feel Like Us. Such a title sounds like Isaac Brock came up with it, but it more accurately echoes the palatable punk of the Replacements. 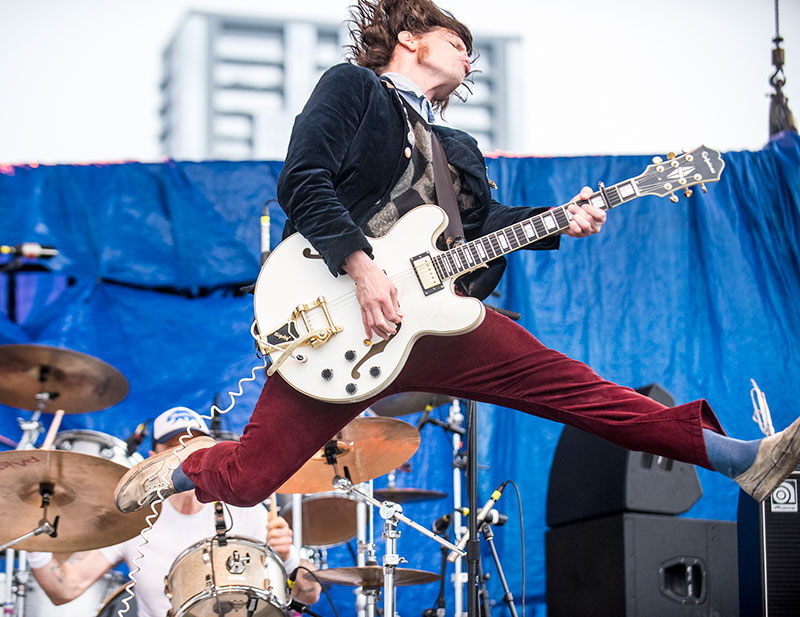 Alex emerged eager and loquacious despite the persistent hovering of über-ominous rain clouds overhead. “This place is gigantic!” he observed, of Auditorium Shores’ leafy sprawl. “Thanks for filling it up for us.”

The 41-year-old frontman teased both Blue Öyster Cult and “Born to Run” from the Boss, but The Things We Do naturally dominated via “Get Lost” and “Bar Art & Weirdo Ideas.” 2014 EP Who Would Ever Want Anything So Broken was also revisited by way of high-octane sucker punch “Filthy Luck.”

Beach Slang later showcased at a 1am Sidewinder gig, where the band will return come May. Wrapping auspiciously, the band finished just as lightning bolts slashed the sky.

“Thanks for giving us a shot tonight,” Alex waved. “We're humbled.”