When you’re 67, you get dibs on the the 7:30pm set time even if you could outdraw most of the later acts. And so Charles Bradley kicked off the stellar NPR-curated lineup at Stubb’s on Wednesday night by taking it back “to when music was music and love was love.”

Alongside the sevenpiece Extraordinares, who share members with Budos Band, Menahan Street Band, et al at Daptone Records, Bradley played hits from his 2011 debut, No Time for Dreaming – “The World (Is Going Up in Flames),” “How Long” – and teased forthcoming third LP Changes, arguably his best effort yet. “Ain’t It a Sin” is the hardest funk track yet from the Screaming Eagle, and the title track laments the loss of his mother.

“I was there when she drew her last breath,” Bradley eulogized. “Every time I sing this song, it’s the love of you in heaven, to the world.”

Before making his signature walk through the crowd to embrace fans, the former James Brown impersonator noted, “If I can’t sing from the heart, I ain’t gonna sing at all.” 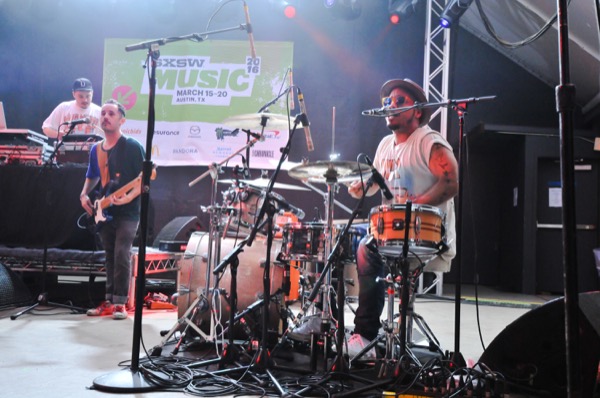 If Bradley embodies old-school soul in its purest form, Anderson .Paak (“And don’t forget that dot; nigga you paid for it”) proves you can honor that sound while pushing the art form forward. Equal parts Eddie Kendricks and Kendrick Lamar, .Paak burst onstage with swag by the pound and a point to prove. After wading into “The Waters,” the Cali native verified he’s a beast on the drum kit, keeping time to his rhymes on “The Season/Carry Me.”

Recent LP Malibu will stand as one of the best albums of 2016, and .Paak is keenly aware of the buzz surrounding his name, even if it’s overdue.

“The past couple of years we’ve played shows here and no one really gave a fuck about us,” he said. “I feel really blessed.”

Chicano Batman has come a long way in a short time, too. The first time the L.A. quartet swooped through Austin, only a half-dozen people were on hand to soak in their bizarro blend of cumbia, surf, and soul. After opening for Jack White last year, they’ve now blessed two of Austin’s biggest stages with unrelenting off-kilter organ grooves and are poised to break out with a new LP later this year produced by Brooklyn soul genius Leon Michels.

Long Beach rapper Vince Staples closed the night with a killer set of cuts from last year’s Summertime ‘06 debut. Over intricate production and skull-rattling beats, “the coldest nigga breathin’” spit flames on “Lift Me Up,” “65 Hunnid,” and “Blue Suede,” all while mixing in hilarious Dave Chappelle-like stage banter between songs.

“Gotta love the South,” he deadpanned. “Slavery aside, it’s a great place to be.”