“Usually we have a full rock band,” shrugged Greta Kline, explaining the empty stage. The woman behind whimsy-indie Frankie Cosmos is already known for both simplicity and quick delivery, but her Sidewinder set Wednesday was even more stripped down, featuring only Kline, her lilac guitar, and a friend providing vocal harmonies.

That lack of fullness, of variety of sound, caused a lot of the material to blend together, despite the set being made up of forthcoming material, picks from recent EPs, 2014’s LP Zentropy, and more. Recordings of “Young” and “O Contest Winner,” two new tracks relying heavily on synths, sound like a dramatic departure from Zentropy, but came out indistinguishable live. Kline even played a song she and her supporting vocalist had penned in middle school, but that, too, sounded like any Frankie Cosmos song.

In spite of that, the unfussy, sincere songwriting and performance that came through Frankie Cosmos were charming and funny. Greta Kline’s just the sort of person you’d have to try really hard to dislike. 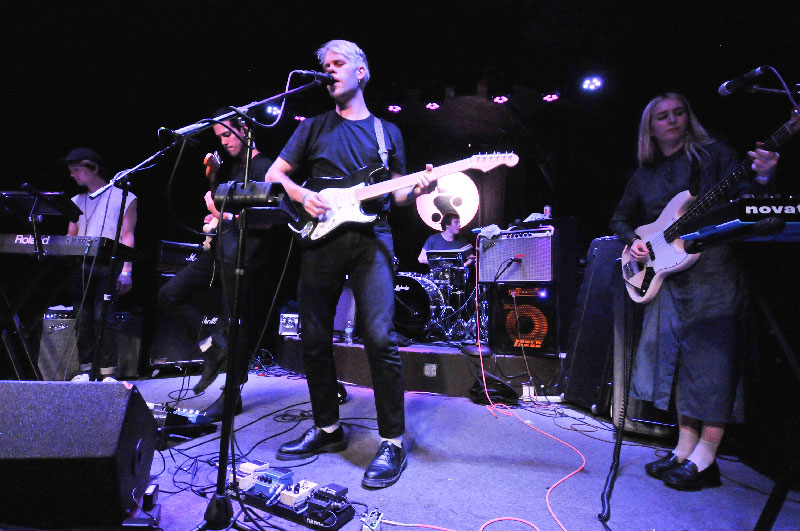 “This is my favorite track,” announced Maine, once Frankie Cosmos’ drummer and more. (Kline used to perform with Porches.)

Thoughtful, dancey “Braid” followed, spearheading more Pool tracks, including “Car” and “Mood.” Older, truly rockin’ tracks like “Headsgiving” found Maine interspersing incoherent babble. The set came to an abrupt end before they were able to hit fan favorite “Be Apart,” the band running out of time as the clock struck 2am.