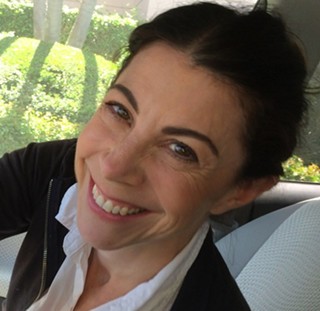 On Sunday, the writer Nell Scovell appeared on the SXSW Interactive panel “How to Stop Speaking in Bullshit” alongside Obama speechwriter Jon Favreau and digital strategist Jon Jones. Among Scovell’s many credits: an episode of The Simpsons, stints at Spy Magazine and David Letterman, co-authoring Sheryl Sandberg’s Lean In.

Jen Sorensen: So how did the bullshit panel come about?

Nell Scovell: Jon Favreau gave me a call. He’s someone I’ve worked with on the White House Correspondents’ Dinner.

Nell: Yeah, they’ve been really nice and asked me to contribute jokes over the past few years. And the topic of this panel is something really important to me, the way we communicate.

I really agree with Jon [Favreau] that authentic phrases are the best, and I hate saying that because I feel like the word “authentic” has now been used to bullshit so often. But I mean it in the truest, and in the least bullshitty sense of the word.

Jen: So do you have a favorite bullshit word?

Nell: One phrase I’ve heard a lot recently is “I’m excited.” People will say, “We ordered some pizza. I’m excited!” Like, really? You’re excited over pizza? I think it came from email. Because you can’t read tone in email, so people started ending emails with “I’m excited” to make it clear that there was some emotion behind, like, “We’re meeting for drinks tonight. I’m excited!” And now it’s the most mundane things that people are excited about.

(An enormous pastry arrives on our café table.)

Jen: Are you excited about that giant cinnamon bun?

Nell: I actually am.

And then the other phrase that’s a pet peeve of mine is “I don’t disagree.” When people say “I don’t disagree,” I always want to go, “So you agree!” And I think actually men say it to women more. You don’t want to give women the satisfaction of saying you agree with them, and so you do this kind of backhanded compliment: “Well, as much as I would like to disagree with you, in this one particular instance, I don’t disagree.”

Jen: One of my favorite bullshit words is “curate,” which I think was mentioned in your panel description.

Jen: It’s a word that I’m forced to use myself now. As an editor I find myself pressured to talk about comics and stories that I’m curating. And I hate myself for that.

Nell: Well, it’s all context… so you might actually be curating. And then it’s not bullshit. But if my local cheese artisan is curating a cheese plate for the Super Bowl, that’s a little bullshitty.

Jen: So what have you been up to today?

Nell: I started with a Broad City panel at 9:30. I went to hear Abbi [Jacobson] and Ilana [Glazer], who were delightful. I had actually written a piece about them for Vanity Fair right before their show premiered, so I’ve been a huge fan of theirs since the start. And they were very open and honest and not bullshitty at all. So that was a great panel. Anne Fulenwider, the editor for Marie Claire, was the moderator.

Then I went over to the online harassment seminar. I’m such an admirer of Wendy Davis. She’s been the victim of a lot of harassment herself, and one of the things she said that really struck me was that she’s been in politics for 15 years – she has a thick skin – and it still gets to her. So she thinks about the teenage girls who are going through awful harassment, and how do you build up their defenses?

Jen: You’ve written a lot about the need for women in media and women in late-night comedy. What’s weird is, so many people still don’t seem to see the problem. Do you also get the sense that it’s an uphill battle?

There I times I think, well, who cares about late-night TV? You’re talking about I don’t know, 150 jobs. But then I go, well, no, it does matter. Because it’s all part of the culture. Plus, these jobs are entry-level jobs. So you go and you spend a couple of years on a late-night show, you learn how to churn out jokes. You get the “Hamburg effect” where you get your 10,000 hours honing your craft, and then you go off and you write movies or create TV shows. If you’re denying women entry at that first level, then they don’t get to the next level. So I do think it matters. It’s not the most important thing. It’s not the same as reproductive rights, it’s not the same as affordable child care, it’s not the same as equal pay. But it’s a tiny piece of that bigger puzzle.

Also, I just want to laugh more. Like, Samantha Bee is so delightful to me, so delightful. And comedy is so subjective, right? Who decides what’s funny is a big question.

Jen: Let’s talk about The Muppets.

Nell: Oh my god, it was so much fun to write for them. There’s something nice about going from early in my career working for Murphy Brown to Miss Piggy. They’re not that different.

Jen: Did you have a favorite episode?

Nell: I co-wrote one where Miss Piggy is on the red carpet and has a wardrobe malfunction, and her tail pops out. It was the first time we’d ever seen Miss Piggy’s tail. And it’s so beautiful. They made her the most beautiful curly tail with just a little spring in it. And that turned into a really interesting episode about body shaming. It’s called “A Tail of Two Piggies.”

Jen: That might just be the greatest thing I’ve heard about at SXSW so far. No bullshit.

SXSW: Exploring Scent as a Storytelling Tool
Can you smell what the Fest is cooking? 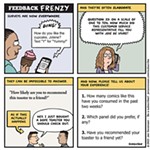 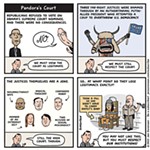