“I’ll go back to brunch, motherfucker. I don’t care.”

“I joke about ‘not giving a fuck’ as a good business model – but it’s true,” said Anthony Bourdain to a big laugh. The host of CNN’s Parts Unknown and unqualified rock star elucidated with an honest-to-goodness candor, built through his experiences and travels. 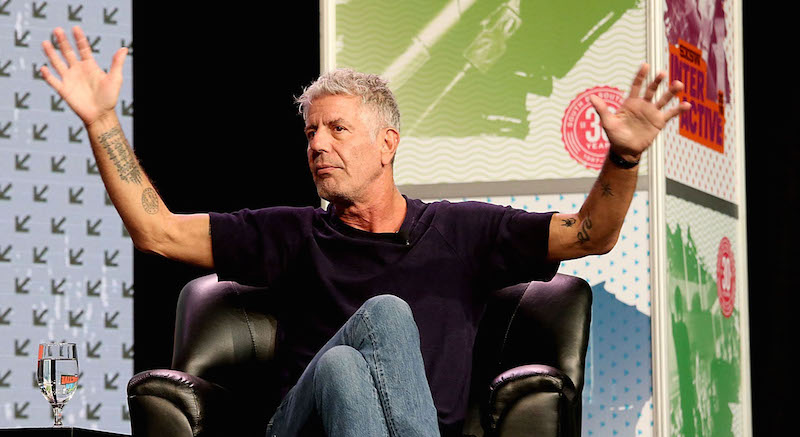 Interviewed by Nathan Thornburgh, co-founder of Roads & Kingdoms – a Brooklyn and Barcelona based digital media startup partly founded by Bourdain – the superstar spoke in his hilariously blue candidness about personal trials and the highs and lows of television production. Show clips from Parts Unknown – principally influenced by filmmakers Bourdain loves, like the Wong Kar-wai bend found in the dizzying Shanghai episode – provided tremendous color for the discussion.

After a clip of the Massachusetts episode – where he delved into his heroin addiction – the former Brasserie Les Halles (Manhattan) chef talked openly about his struggles and its relation to recently publicized drug addiction issues found in rural New England. To this he noted that his past, on display in his best-selling memoir Kitchen Confidential, actually led to his success, saying that he’s “never had a reputation to lose. It’s an advantage.” He claimed it assisted him with television executives: “I’ll go back to brunch, motherfucker. I don’t care.”

Not being tethered to potential judgment enables Bourdain to go for broke, in all contexts, especially concerning his strong liberal editorializing of Parts Unknown. Following the Gaza clip, where he’s asking particularly pointed questions to his subject concerning offensive anti-Arab graffiti, Bourdain explained his desire to cut through to the white meat. “Sometimes when you’re eating, you have to acknowledge the elephant in the room.” His process demands he steer toward “embracing the difficulty and gray area.”

True to his tenets, even acknowledging and embracing television as a manipulative medium – he aims to “[make] an artificial process less artificial” – he’ll never shoot toward the lean of the viewing public, saying, “that’s the road to madness.” Adding, “we know what people like. Every show would be about barbecue.”