The venerable publication looks to the future in virtual reality

New technologies are a dime a dozen, but new mediums don't come around every day. At a series of afternoon panels at Easy Tiger, The New York Times held a coming out party for NYT VR, an immersive medium that bridges the gap between traditional filmmaking and experiential media. 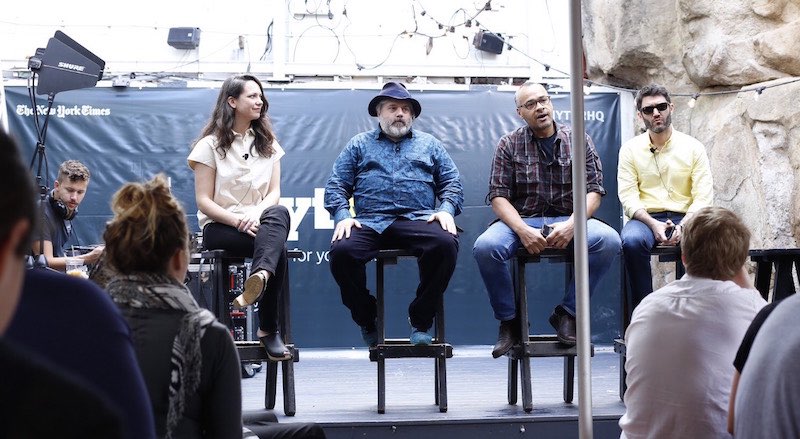 There's currently a dozen videos available through the NYTimes VR app viewable on smartphone with no other gadgets necessary. Turning the phone changes the viewpoint, allowing for a 360 degree perspective that's made more immersive when combined with Google Cardboard, a simple folding headset that holds the phone and blocks out distractions.

The technology has been applied to news stories about border killings and refugee food drops, but the focus of today's 2pm session was of a less political nature. The Music in VR: Are You Experienced panel featured New York Times Magazine Editor Jake Silverstein, VR Editor Jenna Pirog, music video director Lance Bangs, and Run the Jewels manager Amaechi Uzoigwe in conversation about musical applications of the new technology.

The panelists discussed the two musical films currently available via the app, one a music video for Run the Jewels' “Crown” with dueling concurrent narratives from each rapper, the second an in-studio doc on the song-writing process of Odd Future alum Syd tha Kyd and her band the Internet.

The two films show the breadth of the medium's potential, from expanding a music video into more of a visceral experience, to new documentary techniques that let viewers explore a setting that they'd never otherwise be able to visit.

It may seem like a strange new format right now, but by year's end the release of headsets from Sony, Samsung, and Oculus, as well as Google's plan to distribute 20 million Cardboards, should increase popularity to the point where the music industry takes note. The panelists' mood towards greater adoption was overwhelmingly positive, but Uzoigwe did express his doubts, remarking that the music industry doesn't exactly have a great track record of adapting to new technologies. Still the hope is that the music industry sees VR technology as more of a creative opportunity than a financial one, immersing themselves in possibilities rather than profits.