Trapped and the War on Women's Health Care

Doc highlights impact of anti-choice laws in the South

“Unfortunately, we have to turn this young girl away … And there was nothing I could do to save her,” Marva Sadler of Whole Woman’s Health Center in Ft. Worth says with tears in her eyes. 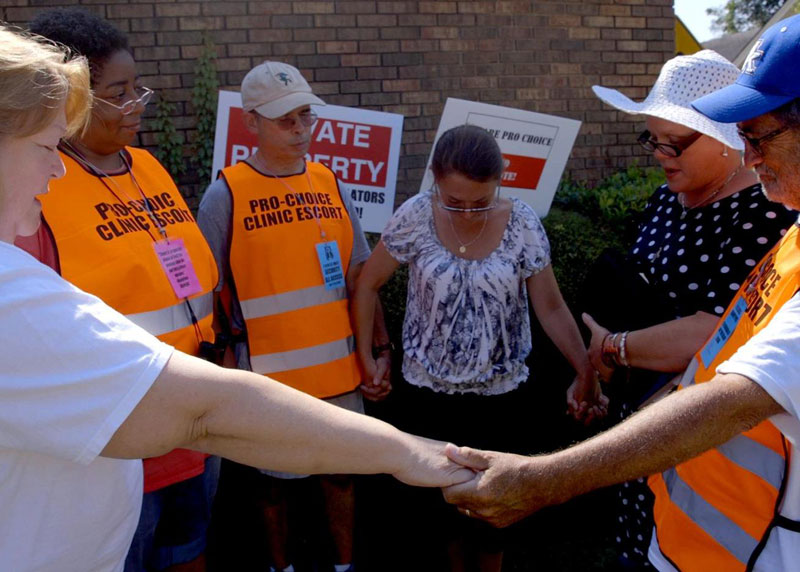 The abortion clinic, one of the few remaining in the state of Texas, was forced to deny a 13-year-old rape survivor from McAllen services as a result of staff shortages caused by the state’s draconian package abortion law, House Bill 2. Sadler goes on to lament the young girl’s scarce remaining options, as she will likely be forced out of the state to terminate her pregnancy due to HB 2’s ban on abortion after 20 weeks of pregnancy. “And so if she has a procedure – and that 'if' is huge – she’ll have to go all the way to New Mexico and pay $5,000 and get there, and spend three days. It’ll never happen – we know it won’t. In those cases, I feel like it’s an automatic sentence to parenthood. We sent her straight to motherhood, because what are the odds of her making that trip – it’s not likely.”

The intimate snapshot of raw emotion and desperate consequences following harsh reproductive health laws is delicately captured in filmmaker Dawn Porter’s latest feature-length documentary, Trapped. Porter traces how abortion clinics in the South – the region hardest hit by the nationwide sweep of anti-choice laws – navigate the endless maze of state-mandated draconian rules and regulations with grace, determination, courage, and a dash of spunk. Porter takes the abstract political battle over abortion rights and infuses it with much needed humanity, giving us a portrait of providers on the frontlines, some of whom, with Southern pride and devout Christianity, colorfully defy the tired stereotypes of what the dominant narrative assigns as “pro-choice.”

“There’s so much labeling and so much invective thrown around in the abortion debate, sometimes just letting people see for themselves what really goes on is important,” Porter tells the Chronicle. “I just wanted to slow everything down and let people breathe. And I wanted to answer: If you were choosing to provide abortion in a state hostile to that service, what does that feel like, what does that look like?”

Written, directed, and produced by Porter, Trapped premiered at the 2016 Sundance Film Festival, scoring the Special Jury Award for Social Impact Filmmaking. Having previously focused on the criminal justice system (Gideon’s Army) and efforts against civil rights (Spies of Mississippi), Porter wasn’t necessarily looking to tackle reproductive rights – that is, until she met Alabama-based abortion provider, Dr. Willie Parker, a compassionate, practicing Christian who travels out of state to provide abortion care. While visiting Mississippi for work, Porter says she was “floored” after discovering in the local paper that the state was home to only one abortion clinic. Her indignation sparked a call to the lone center, where she was introduced to Parker, who led her to his shrinking number of colleagues in the South.

We meet providers like June Ayers, owner of Reproductive Health Services in Montgomery, Ala., who wards off anti-choice protestors with shrewd finesse and Gloria Gray of the West Alabama Women’s Center in Tuscaloosa, a woman that deeply identifies as Southern, even if her progressive views make her a foe in her own community. Familiar Texas faces grace the screen, as well, like Whole Woman’s Health CEO and President Amy Hagstrom Miller – lead plaintiff in the U.S. Supreme Court challenge to HB 2 – and a flashback to former Sen. Wendy Davis’ 13-hour epic filibuster plus the orange army. Davis has thrown her support behind the film, and is expected to speak on a panel with Porter following the Friday screening.

“This certainly was not an easy movie to make,” says Porter. “One of the byproducts of working in such a hostile climate is that there’s a lot of fear and suspicion from clinics even if you assure them you’re part of their mission because they are so used to being in fight mode.” Gaining their trust, Porter was allowed inside the halls of their clinics, where she interviewed patients at their most vulnerable (a rare feat), lending the audience a revealing and powerful examination into the logistical and psychological struggles of women, unduly burdened by the lack of Constitutionally protected abortion access. An Alabama woman, unable to access abortion, hauntingly warns of the black market and self-induction possibilities, “People are going to find a way, if they are truly determined. I was on the Internet looking for any option, but just because I talked myself out of some of those things doesn’t mean other people aren’t.”

On the other end, clinic workers and owners strive to grapple with intentionally excessive regulations specifically aimed at deterring the operation of abortion clinics (aka the titular Targeted Regulation of Abortion Providers, or TRAP Laws) like an onerous rule that forces physicians to obtain hospital admitting privileges within 30 miles of where the procedure is performed and another that forces clinics to make the expensive and unnecessary transformation into ambulatory surgical centers – both requirements can be found in Texas’ HB 2. (Sadler gives us a tour of an ASC, pointing out the costly and inessential additions: lockers, a rarely used pharmacy, special linen buckets, and a full operating room identical to the one found during open heart surgery.)

Conservative-dominated Legislatures have sailed through nearly 300 of these TRAP Laws since 2010, decimating access to abortion, particularly in the South, according to the Guttmacher Institute. Porter says she was appalled to learn of state-promoted misinformation, including health department materials (similar to those found in Texas) correlating cancer with abortion. “I didn’t believe elected representatives would lie,” she says. “I was just really shocked by the amount of inaccurate information meant to intimidate and bully women coming from these states.

From the fragile dependence on just one or few physicians, to the constant threat of overzealous anti-choice picketers who heckle and jeer the clinic workers from their nearby outpost daily to the dizzying influx of new patients due to closed surrounding clinics, Southern abortion providers are shown saddled with nearly insurmountable obstacles. This all the while impending court rulings leave providers anxious, their clinics and the health care of their patients, hanging in the balance. Through the hardship, providers pull from their spirituality, their passion for reproductive health care, and camaraderie to give them the resilience to steer through the state-crafted hurdles. “They have not just a commitment to women but they are refusing to be driven out of the South – I think that’s really heartening,” says Porter.

The film also features the legal warriors with the New York-based Center for Reproductive Rights, who have filed suit on behalf of several states battling TRAP Laws, including Texas. Porter’s film hit just before the U.S. Supreme Court heard oral arguments in the challenge to HB 2 – a pivotal case that has the potential to determine how far states can go when regulating abortion for the entire nation. If the law is upheld, only 10 clinics will survive in Texas. However, she plans to broadcast the documentary on Independent Lens in June, ideally, she says, right before a final SCOTUS ruling on the Texas law. Porter was one of the thousands of pro-choice activists who stood at the edge of the high court’s steps to denounce HB 2 earlier this month. “The eyes of the world are on Texas; what happens there could decide the future of abortion for my generation,” she says.

She reminds that being vocal about the injustice is essential to the fight. “People that are pro-choice can’t be silently pro-choice. Part of the reason why these laws have come into existence is because women that have had abortion have been silent and ashamed, so the conversation around abortion has been this skewed morality tale that doesn’t reflect public opinion. People are really counting on you to make your opinions heard especially in Texas – now, more than ever, is the time to speak up.”