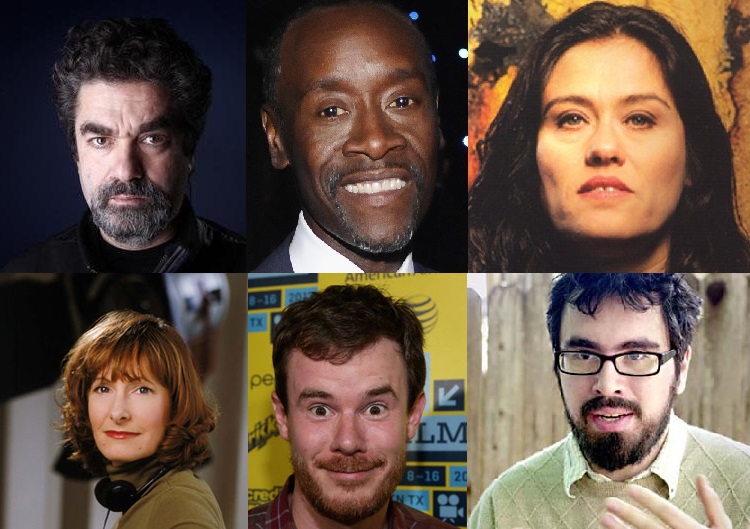 Dubbed the first lady of sci-fi, Hurd became one of the most powerful and respected producers in Hollywood for her partnership with James Cameron on Terminator and Aliens, but is now probably most famous as one of the powers behind AMC’s unstoppable The Walking Dead and its spin-off prequel, Fear the Walking Dead. Swanberg is the epitome of SXSW talent, from early works like Hannah Takes the Stairs to his star-studded breakout Drinking Buddies. As for George, his talk will concentrate on technology, flexibility, and adaptability in a creative career: the right topic for a man who has written musical histories (Where Did Our Love Go: The Rise and Fall of the Motown Sound and Hip Hop America), directed films for HBO (Life Support), and has written and produced Netflix's upcoming A Ballerina's Tale.

They're not the only speakers added. Throw into the mix conversations with luminaries such as Gaby Hoffmann (Girls, Uncle Buck); Don Cheadle (Marvel's War Machine), whose Miles Davis' biopic Miles Ahead screens at SX; and Joel Edgerton (Black Mass, The Gift).

Questions of verity in documentaries will be raised when Joe Berlinger (the Paradise Lost trilogy, Metallica: Some Kind of Monster, Crude) and Barbara Kopple (Winter Soldier, Wild Man Blues) sit down together, so expect their new SX titles (Tony Robbins: I Am Not Your Guru and Miss Sharon Jones! respectively) to be discussed. They're just one of several pairings on the slate, including SX alums Andrew Bujalski (Computer Chess) and David Lowery (Ain't Them Bodies Saints), as well as lifelong friends, SXSW and Chronicle co-founder Louis Black and the arguable king of film criticism, Leonard Maltin.

Those are just a tiny sliver of the 200 film panels, round tables, speeches, workshops, and mentor sessions confirmed today. On top of all that, there's the timetable for the Convergence track: 450 events open to all badgeholders, whether they be Film, Interactive, or Music, on topics as diverse as food, philanthropy, and virtual reality. Of course, the most intense discussions will probably revolve around the online harassment summit, 15 panels tackling the lines between open debate and simple hate speech. The day was announced back in October after SXSW pulled a discussion featuring speakers connected to Gamergate and their critics, and faced a backlash and boycott from anti-harassment groups for, as they perceived it, throwing the victims of trolling out with the bigoted bathwater.

Of course, SXSW isn't just for talking about film: It's about the films as well. So there are even more movies added today to the list, including two music movies added to the 24 Beats Per Second tracks (the world premiere of session player doc Hired Gun and the North American debut of backwoods blues tour I Am the Blues, and new narrative short "Home"). Plus, if you're lucky enough to get into the world premiere of Pee-wee's Big Holiday, stay in your seat, because Judd Apatow is bringing some special friends along for a one-off comedy show.

And all that is on top of all the films, midnighters, and previously announced sessions with J.J. Abrams, Andrew Jarecki, Geena Davis, Rami Malek, Christian Slater, Kerry Washington, and many, many, many (did we say many?) more. To all of which, we can only say, phew. So head over to schedule.sxsw.com for the full listing.

Follow all our coverage, including news, reviews, interviews, hints, tips, and gossip, at austinchronicle.com/sxsw. Sign up for our Daily SXSW coverage for the latest news and follow us on Twitter to stay in the know.