Guitar pedals to meddle, UK and Aussie legacies turn up

Lo, down came the angels from guitar heaven, to bestow upon the mortals the gift of six strings, a plethora of pedals, and loud amplification. And it was oh-so-good. Following sets of classically-trained and ethereal electronica by Brooklyn’s Gabi and bratty psych-pop from L.A.’s Gateway Drugs, UK shoegaze legacy Swervedriver began its second SXSW 2015 performance. Reveling in a heavy wall of reverb and distortion, and with Supergrass bassist Mick Quinn standing in for an absent Steve George as drummer Mikey Jones powered the engine, guitarists Adam Franklin and Jimmy Hartridge laid down a fearsome noise.

The pair soaked mid-tempo charmers “Autodidact” and “Setting Sun,” both from the new I Wasn’t Born to Lose You, in a rain of fuzz, while classic blasters “Rave Down” and “Son of Mustang Ford” let loose a storm of volume. Franklin’s laid-back singing acted more as extra texture than lead instrument, which didn’t help the band’s nearly immobile stage presence. By the time the show ended with the explosive “Duel,” eardrums were so mangled it hardly mattered. 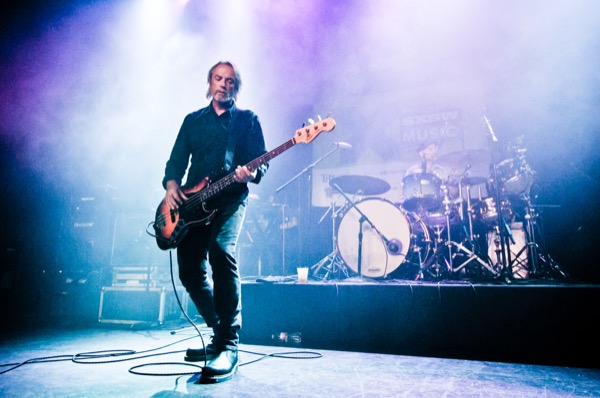 Postmodern icon the Church gets accused of wispiness thanks to its career-defining hit “Under the Milky Way,” but the Sydney quartet becomes a bona fide rock band in concert. “Is This Where You Live,” from 1981 debut Of Skins & Heart, floated languidly in the ether, but soon bashed a gentle ballad into a rock anthem. “Delirious,” a popwise highlight of new album Further/Deeper, bristled with energy, and the eccentric “Toy Head’ became the prog-rock epic it needed to be.

2006’s “Block” metamorphosed from brooding thrummer to relentless menace. “You Took,” the band’s 1982 acid epic, overwhelmed thanks to merciless rhythm and skronktastic solos. Combining E-bow, wah-wah, 12-string, and bottleneck, guitarists Peter Koppes and Ian Haug filtered their instruments through piles of pedals that would make the average shoegazer spasm.

Gray but still handsome, singer Steve Kilbey embodied the gracefully aging rock star, charismatic enough to put down his bass and fully emote the withering put-down “The Disillusionist.” Though the crowd lapped up the new material, it saved its most heated enthusiasm for the hits: “Metropolis,” a blazing “Reptile” (which earned the biggest roar of the night), and, of course, “Milky Way,” which Kilbey introduced by referencing “that car commercial you really like.”

“I normally hate these convention things,” the bassist commented near the end, “but I’ve really enjoyed myself.”

He and the rest of the band proved it by burning down Further/Deeper’s designated closer “Miami.” No encore needed. No Church fan old or new left Emo’s unsatisfied.