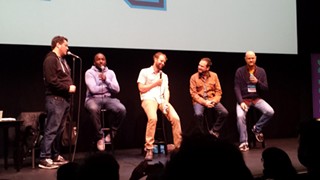 During his second show at this year’s Fest, comedian Doug Benson said the Downtown government buildings made a “great backdrop for all the anti-government movies they’re showing” at SXSW. Just as fitting: his 4:20 curtain call three blocks from the Texas State Capitol.

Yesterday, Benson taped a live recording of his podcast Doug Loves Movies at the Stateside. He was joined by fellow comedians Hannibal Buress (cast member of Broad City and previous writer for 30 Rock), Brooks Wheelan (of Saturday Night Live), Matt Bearden (Funniest Person in Austin winner), and John Erler (of Master Pancake). The podcast followed the usual format, complete with crowd work, film-related games with the guests, mediocre prizes, and a lot (like, A LOT) of weed jokes. Both newcomers to the franchise, brought in by the Festival, and longtime fans seemed to have a lot of fun.

To start, Benson recounted some of his highlights from this year’s Fest, which included run-ins with some of Austin’s most beloved figures. “I smoked weed with Willie Nelson,” said Benson. “So thank you, Austin, for making that happen.” He added that Nelson agreed to appear on Getting Doug With High, Benson’s YouTube show in which he invites guests to smoke pot with him. (Fingers crossed on that!) He also talked about this year’s Interrupts show with Erler, in which the pair maintained their running tradition of Benson and Master Pancake parodying a film from the Leprechaun franchise on St. Patrick’s Day. This year’s performance: the too rarely screened Leprechaun 3. That discussion got all the guests pondering the films in a manner reminiscent of the podcast How Did This Get Made? Wheelan had an idea regarding Leprechaun 4: Leprechaun in Space, and Leprechaun 5: Leprechaun in the Hood. “They asked themselves, what makes less sense than a leprechaun in space?” said Wheelan. “A Leprechaun in Compton.”

The show ended with one round of the Leonard Maltin Game – a regular bit in which guests have to guess a movie based only on an excerpt from a Leonard Maltin review and a few actors’ names. The guests wager on how few names they need to guess the movie, and then Benson gives them that number of names, starting with the supporting cast. To select a movie, he let Erler pick from a collection of themes. Naturally, Erler went with the Austin-based option, films with “weird, bats, or traffic” in the title.

Benson will return to Austin in May to perform at Cap City Comedy Club, and to join members of Master Pancake as they lampoon Sleepaway Camp 2 and 3. (They parodied the first Sleepaway Camp together earlier this year.) In the meantime, you can catch Bearden performing at Moontower Comedy and Oddity Fest in April. And watch Benson’s website for last night’s recording.

SXSW Comedy: The Super Secret Show
Sinbad can still bring the house down