We can thank South Korea for many things: bimbibap, director Park Chan-wook, Psy, and the 38th parallel among them. Now let us raise a glass of soju and toast our good fortune at discovering Seoul-based Victim Mentality. Friday brought the second half of SXSW’s Korea night, but it might as well have been 1990 at the Starwood on the Sunset Strip. 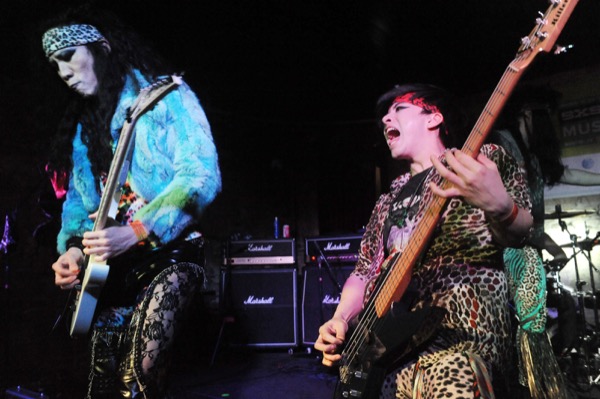 Glam metal dead? Not on your life. It’s simply changed hemispheres and now thrives on kimchi instead of the more traditional fare of blow, booze, and babes.

Playing to an overpacked crowd, the band looked the part – of Warrant’s best buddies – with hair extensions nearly to the floor and enough technicolor spandex to impress even Richard Simmons. Then guitarist Kyungho Sohn hit the first monster power chord of Korean smash “Don’t Spit on Me” and all of hair metal’s sins were forgiven in a high decibel blast of pure pop metal froth.

Frontman Krocodile lunged to the front of the stage and let loose a yowl, a come-hither glint in his eye, and more strutty swagger than Cinderella’s Tom Keifer and Skid Row’s Sebastian Bach combined. The crowd roared its approval and Victim Mentality roared right back at them.

Drummer Tarantula kept up a mid-tempo beat, occasionally kicking it up a notch, and Sohn’s fretwork can’t be faulted. Six songs in, the band closed with kickass chorus shouter “I’m Not Your Friend,” which may or may have a ring of truth to it. Certainly the long lines of autograph hounds fervently prayed that wasn’t really the case.