Hip-hop lineups are infamously fraught, and the Highland’s Friday night slam was no exception. The guest of honor, Tallahassee swingman T-Pain, never showed – perhaps exhausted from a mammoth Fader Fort set that afternoon. 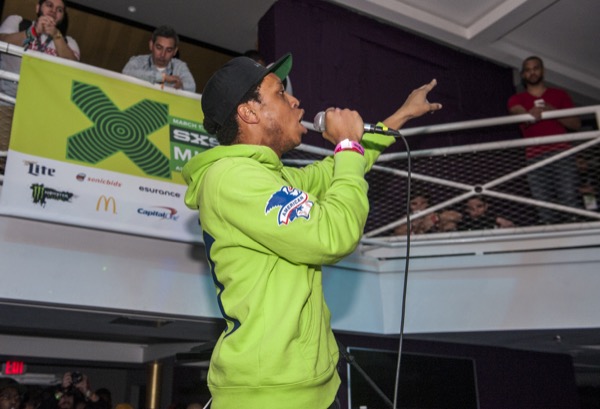 Disappointment No. 2: After waiting a rumored two hours to perform, Oakland songstress Kehlani took the stage for just a brief moment, informing fans the set had been cut due to “technical difficulties.” As one annoyingly cheerful fan chided: This is SXSW, and a silver lining is thankfully never more than a set change away.

Indiana stoner Tiara Thomas doesn’t deal in shy. Rocking sunglasses and a pocketful of dank verses, she explained, “I like to smoke weed, and I like to write songs about smoking weed.” The 25-year-old songwriter coaxed the crowd into joining her on “Bad,” the collaboration with rapper Wale that catapulted Thomas from YouTube anon into bone-crushing Interscope rookie.

After last call the crowd began to thin, but NOLA wordsmith Pell nonetheless blew through his two-song set. Last year’s shuddering Floating While Dreaming deserved more of a showcase, but at least he made it before the lights cut on.