Hard to imagine that time, pre-Fox News and Bill O’Reilly, when facts mattered, on-camera civility reigned, and Dan Ackroyd’s Jane-you-miserable-slut comment was so funny just because it was so unimaginably outré. 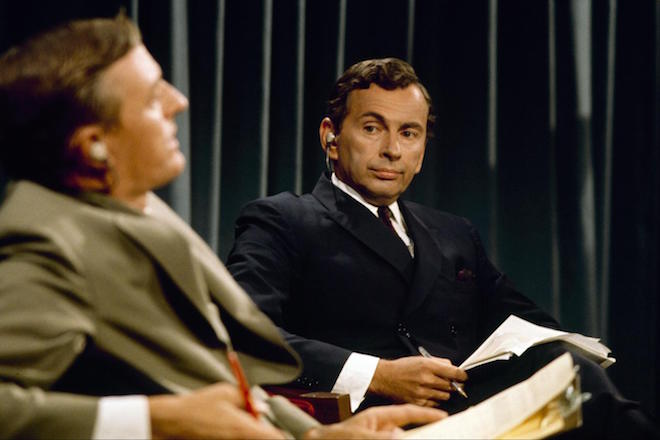 As Robert Gordon and Morgan Neville's documentary, Best of Enemies, would have it, it was in 1968 that restrained political discourse may have taken its first irreversible step down the ad hominem path, when, in an attempt to boost its tanking ratings, ABC News seated longtime enemies Gore Vidal and William F. Buckley Jr. together in front of the camera for a series of 10 debates during the two Presidential conventions.

With each encounter the level of already-simmering hostility rose between the two well-spoken, patrician-accented public intellectuals until a flash point when the arch, “gay” author of Myra Breckinridge called the arch conservative founder of National Review and the host of PBS’ Firing Line a “crypto Nazi” and then Buckley called Vidal a “queer” and threatened to punch him in the face. All on network TV. There was journalism and there were lawsuits and well, you know, nothing has ever been the same. Terrific archival clips of the debates, spot-on talking head commentaries from familiar well-loved, far cooler urbane heads from Jack Paar and Dick Cavett to Christopher Hitchens. What a fun ride!