Home can be such an ambiguously subjective notion. It hearkens where you’re from, no matter how far away ambition takes you. Take rising stars Gary Clark Jr. and Shakey Graves, two locals now aligned with the road. 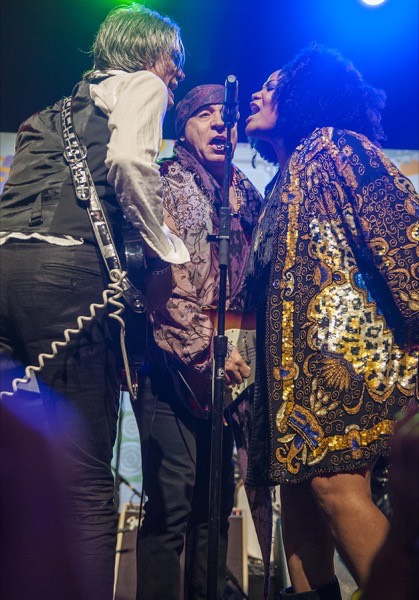 Home also beckons as a destination, a place and community to discover, as it did for Rock & Roll Hall of Fame inductee for both the Small Faces and Faces, Ian McLagan, who called Austin home for the final 20 years of his life. And home encompasses the people you love, as 2015 Austin Music Awards queen Gina Chavez, who took home Best Musician, Album, Song, and Latin Artist of the Year, declares on her stellar 2014 sophomore LP, up.rooted: “All I know, my home is your heart.”

The theme of this year’s 33rd Austin Music Awards, led by organizers Celeste Quesada and house band leader Charlie Sexton, announced “All Roads Lead to Austin.” It could have equally acknowledged “All Roads Lead Home.” For those born locally and those migrating here daily, Austin in all its ever-changing, rapidly growing, intransigently nostalgic inertia remains home.

Nowhere does that manifest more powerfully than in the city’s music.

“This evening is not a competition. It’s a celebration of Austin Music,” offered Austin-via-Austria transplant Ulrich Ellison in accepting Best Blues/Funk/Soul Band. “We are all in this together as a community, and we have to make people remember that music is the beating heart of Austin.”

Outlaw poet, Billy Joe Shaver, set the same theme in an opening musical benediction, extolling his founding Texan lineage with “Heart of Texas,” and recent Long in the Tooth cuts “Hard to be Outlaw” and the biting “The Git Go.”

AMA hosts Rick McNulty and Laurie Gallardo moved the three-and-a-half-hour ceremony along with energy for the sold-out crowd, while Sexton, a musical wrangler if there ever was one, led the all-star house group of Michael Ramos, George Reiff, and Conrad Choucroun through a dexterous stylistic range between awards.

Those courses set the stage for Eve Monsees and Gary Clark Jr. to reunite like days of Antone’s past (and possibly future), the pair mounting a fierce guitar commencement alongside Sexton, with Monsees’ “Thing For You” segueing into Clark’s electrifying “Travis County.”

Closing out the awards, repeat Band of the Year, Riders Against the Storm, and sweeping diva Chavez both delivered emotional and passionate speeches, and signaled the setting of a new foundation of elite Austin artists.

Ian McLagan’s exuberant spirit hung over the entire evening, and as Sexton welcomed “Scrappy” Jud Newcomb and the Bump Band to the stage, the memorials transformed to enthusiastic tribute. With Ramos holding down Mac’s role on keys, the band worked through a moving “Shalalala” from last year’s United States and the Faces’ “Glad and Sorry.”

Tameca Jones returned to burn through “(I Know) I’m Losing You,” and Alejandro Escovedo reprised the Kinks’ “I’m Not Like Anybody Else,” which he recorded with McLagan before Mac’s death. Patty Griffin’s beautifully rendered “Never Say Never” set the emotional bar before special guest Steven Van Zandt emerged to lead the raucous climax with the Small Faces’ “Tin Soldier,” and Faces’ “Stay With Me,” Sexton, Newcomb, and the E. Street Band guitarist expertly trading licks. On closing sendoff “Ooh La La,” the crowd joined in on the extended chorus.

McLagan’s son, Lee, may have most appropriately expressed the spirit of the evening in accepting his father’s AMA for Best Keys: “My dad would be thrilled to be here. He loved this city so much. I hope he gave you a good time, because you gave him a home.”