Everybody loves some body sometime

Why does the movie Nina Forever exist? 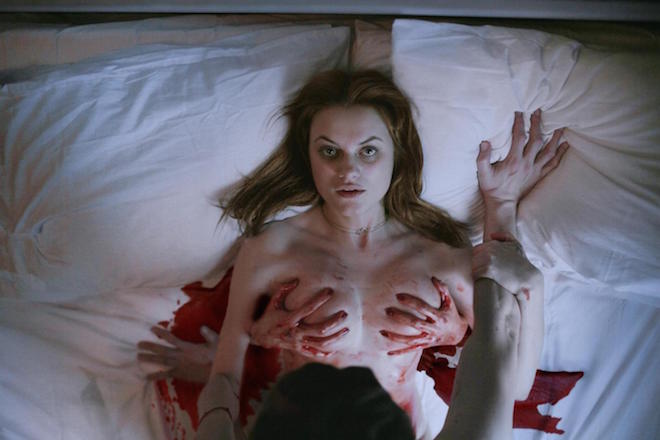 The obvious answer is that writer-directors Ben and Chris Blaine had a macabre idea and, wrangling producers and actors and crew, worked their asses off, and everyone else’s asses off, to bring it to bloody fruition. Because this is a cause-and-effect sort of universe, after all, acted upon by creatures of free will – and sometimes a dark cinematic entertainment is the result.

But maybe, who really knows, maybe some overarching cosmic force insisted that now was the time for a romantic tragicomedy that seems like a deftly unnerving collaboration between Lorrie Moore and Clive Barker to manifest itself in the universe. And those Blaine Brothers, as predetermined as the rest of us in this illusory realm, were merely the pawns of desire?

Doesn’t matter, really. Much like it doesn’t matter how, after the film’s Rob (Cian Barry) hooks up with Holly (Abigail Hardingham) and the two of them are putting the flagrante into the delicto atop his clean white sheets, Rob’s recently deceased girlfriend (Fiona O'Shaughnessy) shows up, fully embodied (and snarkily vocal) but bloody and torn, to complicate matters and stain those bedclothes crimson.

Doesn’t matter, as we namechecked Moore and Barker to indicate the high quality of the morbid narrative here – by turns quirky, charming, harrowing, contemplative, and gruesomely fucked up – and the Blaines (and that damned fine cast) have crafted it into a film worth watching, with an undercurrent that slowly pulls an unexpected (and oddly empowering) conclusion through this grue-spattered body of work.