Clever comedy about that one weirdo every family has 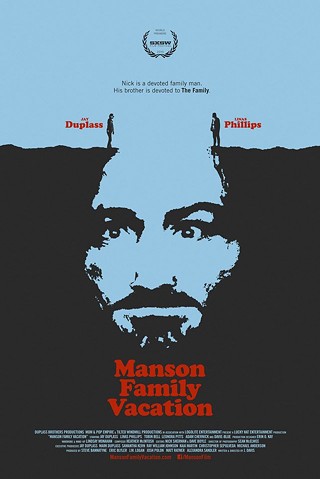 Graphic designer Yen Tan won the won the award for Excellence in Poster Design for his Manson Family Vacation poster at the 2015 SXSW Film Awards on Tuesday, March 17.

Every family has at least one. A cat-lady aunt. An artist cousin. An uncle who camps out in the backyard in a Charles Manson T-shirt.

In writer/director J. Davis’s directorial debut, Manson Family Vacation, Conrad (Linas Phillips) travels to L.A. to visit his straitlaced little brother, Nick (Jay Duplass). A bit of an outcast, Conrad has some interesting hobbies, like insisting he and his brother tour the Manson Family murder sites. Hoping to mend a tenuous relationship, Nick agrees. But touring sites made famous by a racist serial killer tends to have its complications. Nick soon grows suspicious that there’s something Conrad isn’t telling him.

Davis previously co-wrote and edited the 2011 music doc Kevin, which Jay Duplass directed; both Duplass brothers are credited as executive producers on Manson Family Vacation; and they just sold Manson Family Vacation (in addition to fellow competition film 6 Years) to Netflix as part of their four-picture deal with the streaming giant. So it’s fitting this film feels like a Duplass project in all the best ways. It has a tight cast and lots of great dialogue. At its heart, the film discusses what it means to be family and the different ways we process loss. But Davis cases it in a clever narrative that successfully walks that fine line between good comedy and distastefulness.