Sinbad can still bring the house down 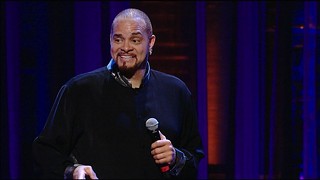 The advance billing for SXSW Comedy’s Super Secret Show left everything to the imagination until the 11th hour, having simply promised for weeks to deliver a “true legend” onto the yoga mat-sized Hideout Theatre stage. “This is like one of them experimental theatre places,” the performer chuckled after being introduced.

So who on Earth did the festival have up its sleeve?

None other than Sinbad, baby.

That’s right: we had another Sinbad sighting at SXSW. (He also played the festival in 2014 under similar circumstances.) And what may surprise you was that a chunk of the 75-person capacity audience was young enough not to have even been born during his heyday of the late Eighties and early Nineties.

So evidently not all millennials are dismissive of everything that predates their precious little existence. Some like it old school. And that’s definitely a good thing for those of us who are definitely getting older.

A more age-appropriate woman in the front row caught Sinbad’s attention during an early round of crowd work. Upon informing him that she was in from Oklahoma, where she’s working with a team to put together a comedy festival in Tulsa, Sinbad replied, “Oklahomans have comedy? I saw your fraternity, that was funny. I love when dumb white people tape other dumb white people. ‘Do the nigger thing again! Do the nigger song! Put it on Instagram!’”

Sinbad, now a rather striking 59 years of age, was not – I repeat, not – sporting a track suit, but he did look better than most UT seniors you see lurching to class across Guadalupe. Comedy, however, is not a beauty contest. One doesn’t get laughs from aging like fine wine. Even seasoned pros like Sinbad still have to earn it every time they rock the mic.

More than even the countless laughs he elicited in his fairly whopping hour-and-a-half set, it’s safe to say that the cozy Hideout audience will remember the performance as a testament to what an ostensibly good guy Sinbad is. The setting naturally helped imbue a strong sense of connectedness between audience and performer that’s beyond rare when dealing with a celebrity of his magnitude. And even though his good-natured likeability was through the roof that night (and is assuredly par for the course from what audiences can see), he’s no saint. He’s just an extremely successful comic and entertainer who’s been around the block and seen some shit.

On the subject of infidelity, he went on to school some lovestruck youngsters that he’d previously peppered with questions about their love life on what men and women tend to, from his comedic point of view, fixate on as they age: “Women don’t (cheat) with something less. If a woman cheats on you, she finds more money, more house. See what I’m saying? A man will sleep with a woman that’s homeless because she looked kinda good: She had that shopping cart and you saw that booty, you gave her a couple cans.”

Even if Sinbad isn’t your style, and even if you – like a lot of people in the 21st century – haven’t really thought about him that much lately, seeing him live relays a valuable lesson: Just because a certain entertainer is no longer starring in television shows and movies and HBO specials, it doesn’t automatically mean he's lost “it.” Let it be known in case you’ve written him off as “washed-up”: Sinbad can still bring the house down.

Roughly half his set was sheer crowd work; the other presumably a blend of old and new material. But the point is that he nailed a 90-minute set by cracking everyone up on the subjects of love, sex, relationships, race, and more. “The hardest thing for a man to say is ‘no,’” he seemed to be lecturing a 14-year-old boy in the front row. “Women can say ‘no.’ Women have learned ‘no’ at an early age: ‘You wanna dance?’ ‘No!’ ‘What’s your name?’ ‘No! No!' Men, we’re so happy when someone give us some, we don’t turn nothing down. Even at the Waffle House, when we can’t find nothing else, we go to the Waffle House for one last run. Two in the morning, she sitting next to you, ‘Sup, girl with no teeth?’ Because men have no dignity sometimes.”

Gender dynamics and differences have long been the bread-and-butter of many comedians, both good and bad. The more cynical among us tend to complain about clichés and worn-out tropes in comedy, and although it’s easy to rail against such things in philosophy, the fact is that men can never understand what it’s like to be a woman and vice versa. Which is why we need good comedians of all sexes, orientations, and backgrounds to help us at least try.

Say what you will about Sinbad and other great comedians who’ve faded away to varying degrees in the digital age, but if you were there on Tuesday night – even if all Splitsider-y and cynical – you would’ve loved it. Or at least had no choice but to respect the technique.