Conspiracy theorists are always there when we need them, hyperbolizing on cable access and web forums, hand-holding us through our bouts of insomnia. And in thanks, we mock them. But what if they’re right? What if Ron Perlman really did fake the moon landing? To be fair, it was pretty kick-ass. 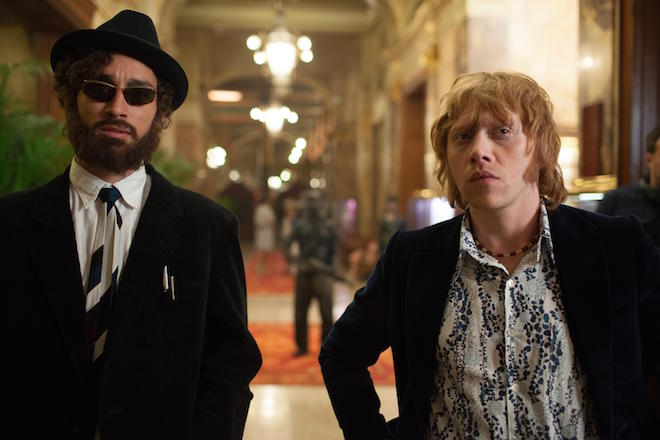 In Antoine Bardou-Jacquet’s debut feature film, Moonwalkers, Perlman (Hellboy) plays Kidman, a CIA agent hired by the U.S. government to help Stanley Kubrick fake the Apollo 11 moon landing as a fail-safe in case the real landing fails. (The idea is based on a well-known conspiracy theory, one recently explored in Rodney Ascher's documentary, Room 237.) But instead of getting Kubrick, Kidman accidentally hires Leon, a stoner lookalike (played by Robert Sheehan), and his well-meaning loser friend, Johnny (Rupert Grint of Harry Potter fame). Drug-induced antics with a Heinz Edelmann-like backdrop then ensue.

The cast and crew must have had a blast making this smart, silly film. Along with a lot of laughs, Moonwalkers offers a lovingly critical take on pop culture, touching on themes of patriotism and film industry pomp, without getting cynical. Although the film never breaks the fourth wall, the audience feels in on the joke. Good thing, too. Kidman makes short work of anyone he doesn’t like.