This show was the year's Holy Grail of comedy

A week from now when we all reflect on the adverse lifestyle choices we made during SXSW 2015, the dedicated minority who stuffed their way into Esther’s Follies on Monday night for The Laugh Button Live showcase will gently smile to themselves and nod off with an IV in their arm.

Burr and Madrigal had zipped around Downtown like tweakers attached at the hip on Monday: first co-presenting a panel, then co-hosting a live podcast taping that afternoon, both under the banner of All Things Comedy, the nascent comedy collective and podcast network they founded together in late 2012.

While all six comics kept the intimate Esther’s crowd enthralled with their own unique voices, the buzz swirling around Sixth and Red River in the hours before showtime was unquestionably generated by, in this order, Burr, Burr, and more Burr.

Which is not to imply that co-headliners Madrigal (who is best known for his role as a correspondent on The Daily Show with Jon Stewart) and Bargatze are anything short of terrific. It’s just that Burr is a force of nature who’s been one of comedy’s biggest draws for years.

The 35-year-old Bargatze is perhaps best described as an “indie comedian,” both for the subtlety of his humor and his relative obscurity to mainstream audiences. (Alternative crowds at smaller comedy festivals around the country totally know what’s up, though.)

In many ways, the All Things Comedy connection of Madrigal and Burr seems counterintuitive when you compare their comedic styles side by side. Most of us know that a Burr set is like a series of detonating time bombs: sustained flashes of anger, frustration, dismay, and political incorrectness with the volume cranked full blast. Madrigal, on the other hand, exhibits a more thoughtful and centered approach to comedy that oftentimes tricks people into thinking him sane and good-natured until he proves them otherwise with unexpected f-bomb torrents and tales of vindictiveness.

A particularly cutting and revealing moment in Madrigal's set came when he described the sacrifices of balancing his unique line of work and its grueling travel demands with family. “Because of The Daily Show, I was flying back – I left my family in L.A. – and I’m flying back and forth, so I’m just commuting almost every week … and I missed a lot of shit. I missed four dance recitals in a row. My daughter was pretty sad about that, so she looks at my wife, and she says, ‘Is Daddy gonna miss another one of my dance recitals again this year?’ And she got sad.” (And upon a female audience member in the front row letting out an audible sad groan): “Let’s not ‘Ohhh’ too much. [Let's] put a dollar amount on a piece of paper, slide it to you, and we’ll see what you fuckin’ miss. It’s true. My wife knows that’s how dance class gets paid for."

Taking the hand-off from emcee Virzi, Burr went full Burr in the opening remarks of his 26-minute set: “I’m in a grumpy fuckin’ mood,” he intoned, before spending a good portion of his time onstage ripping the politics of physical appearance in show business. “I’ve seen women complain about this: They get booked in a fuckin’ Hollywood movie, and then Hollywood tells ‘em to shed a few, and they get upset. It’s like: Yeah! You’re in a fuckin’ movie! Try and look your best!”

But that was far from the last word on a national conversation that 2015 Best Supporting Actress winner Patricia Arquette brought to the fore at the Academy Awards in February. “I’m so sick of their fuckin’ bitchin'," Burr said. “Bitchin’ that an unfair business is treatin’ you unfairly. It’s all fuckin’ unfair! All that whining at the Oscars: ‘I don’t make as much to play a cowgirl when you play a cowboy.’ Am I honestly supposed to give a shit? I don’t understand why I’m supposed to care. I’m not trying to be a caveman up here, but women: Do you give a shit about guy problems? Are you even aware of any? No! Right?! You don’t give a shit! Then why do I gotta waste my time caring about a situation where I’m winning?!"

Some men, of course, are winning more than others, Burr was quick to point out. Also an actor, the outspoken 46-year-old had his most memorable turn recently playing a versatile con man in Seasons Four and Five of AMC’s Breaking Bad. Never to be spoken of in the same breath as the Brad Pitts and George Clooneys of the world for several glaring aesthetic shortcomings, Burr understands full well that looks drive much of the industry; and at the risk of putting words in his mouth, he’s basically on board with it, even to his professional detriment. “Just look at me: You don’t think there’s a glass ceiling on my castability? Do you really think as a balding, redheaded male, I’m gonna play the lead in a romantic comedy? I’m not! I know I’m not good-lookin’! If I was financing the film, I wouldn’t cast (me)! I’m not trying to lose money, okay! … Do you know how arrogant of me it would be to start something: ‘Hey, how come a bald guy can’t be the fuckin’ lead?’ ‘Cause you’re fuckin’ bald, you asshole! And no one wants to look at that!'"

Considering that this is a guy who could likely sell out the Paramount nonstop for months on end, the select few who caught Burr at Esther’s on this night must have felt like they were having a dream in which Led Zeppelin played their buddy’s wedding. Outside of New York and Los Angeles, it’s exceedingly rare for the remainder of the country to see a comedian of Burr’s stature perform in such small confines. But this is SXSW: Discount nothing, but prepare to wait for the big bang. 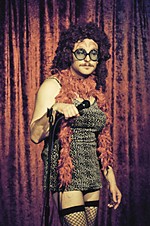 Adomian's Ascension
This year's SXSW is James Adomian's festival, we just laugh in it