SXSW Film Review: Out to Win 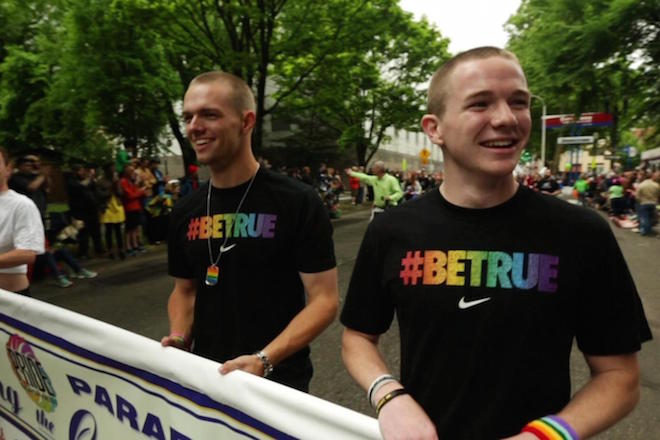 So when producer and Outsports.com's Cyd Zeigler dubbed 2014 "the Year of the Gay Athlete," the time on the shot clock to examine "Why?" began to tick. Director Malcolm Ingram (Small Town Gay Bar, Continental) and Zeigler assembled a dream team of LGBTQ athletes: From Seventies San Francisco 49er David Kopay and tennis legend Billie Jean King to contemporary icons including the WNBA's Brittney Griner, NBA's Jason Collins, and Canadian hockey player, Charline Labonte (whose coming out story broke online as she interviewed for the film).

Muscular montages, ripped right out of half-time (Freddie Mercury bellows gay battle cries "We Will Rock You" in the intro and "We Are the Champions" at film's end), evoke many a rah-rah ESPN sequence. The roster is packed with thrill-of-victory/agony-of-defeat clichés, albeit splashed with rainbows (sometimes, quite literally). It's certainly ready for the locker-room tolerance workshop circuit.

Unfurling the narrative of NFL draft-hopeful Michael Sam amidst generations of very different sports v. sexuality sagas, Out to Win proffers a timeline of LGBTQ acceptance in one of the toughest fields of play: professional sports.