Powerful doc about the vitalness of photojournalists 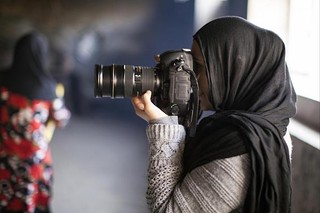 Awakening from years of the Taliban’s oppressive crackdown on free speech (1996-2001), Afghanistan has spent roughly the last decade ridding itself of a world where simply snapping a photo is a criminal act.

While the days of regime soldiers storming photo booths to rip apart wedding pictures and family portraits are in the rearview mirror, fear and palpable danger continue to ripple through the country's photography rebirth. Frame by Frame delicately inter-weaves the lives of four photojournalists, brazenly dedicated to exposing realities – however unsavory or taboo – while navigating the residual chilling effect of government suppression. From human atrocities, terrorist bombings, drug addiction, famine, and domestic abuse to the empowering and unconventional roles of Afghan women, the photographers go to great lengths – enduring threats and compromising their own safety – in their pursuit to give a face to those shrouded by injustice. Deftly employing cinema vérité, the beautifully shot film – rife with the sounds, faces, and scenery of the region – is enough to leave audiences craving another feature from Kickstarter-funded filmmaker duo, Alexandria Bombach and Mo Scarpelli, who prove as tenacious and brave in their cinematography as the subjects they capture. Frame by Frame stands as a reminder of photography’s importance to cultural identity and preservation, freedom of expression, and ultimately, the quest for truth.