About 1,300 people showed up for detention with Ally Sheedy and Molly Ringwald on Monday for the premiere of the 30th anniversary edition of The Breakfast Club.

Attendees enjoyed complimentary mimosas and doughnuts while the Barton Hills choir serenaded them with a rendition of Simple Minds’ iconic song, “Don’t You (Forget About Me).” Finally, Ally Sheedy and Molly Ringwald took the stage for a 30-minute Q&A before the restored and remastered film unspooled. 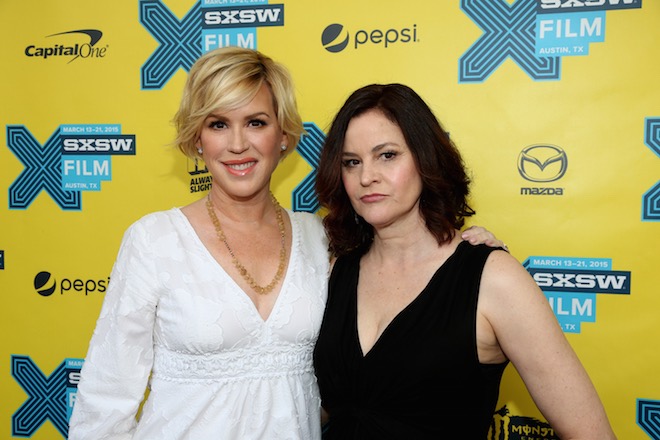 The discussion began by putting the film, so deeply entrenched in an 80s ethos, in a contemporary context both aesthetically and from a moviemaking perspective. If this movie were being made today, “someone would have turn into a vampire or a zombie [movie],” said Sheedy.

“I don’t think it could happen without [writer and director] John [Hughes] shepherding it,” said Ringwald. That said, “the movie is still relevant today because of its message: No matter who you are, we’re all outsiders. Everyone feels alone. Our kids today have Instagram and Twitter and they still contend with bullying and popularity. It’s just that today, the ‘liking’ is more tangible.”

“The message there was, ‘You do matter, we are interested in you, and we’re going to tell your story,’” Sheedy agreed. “There’s something loving about that particular message and when you’re 16, you see that your life really means something.”

Sheedy and Ringwald then shared some trivia from the making of the film, such as that Sheedy had to eat three of those pixie stick-and-Captain Crunch sandwiches, and that Judd Nelson improvised many of his lines in the film.

The improv in the film demonstrates how The Breakfast Club’s narrative was free to expand in ways that don’t square with current filmmaking methodologies. “John would just keep filming until the mag ran out,” said Ringwald. “You couldn’t do that in Hollywood today.”

See photo gallery from the event. The restored 30th anniversary print of The Breakfast Club will screen again on Saturday, March 21, 11am at the Topfer (without cast in attendance).