Only one is about cats

Jonah Peretti might not be a household name, but as the co-founder and CEO of BuzzFeed, few people have had as dramatic an effect on Internet media. And that goes way beyond adorable cat videos.

Speaking to a packed house at SXSW Interactive for the Lessons From BuzzFeed session, Peretti gave a rapid-fire outline of how his company's content evolved from photos of basset hounds to 12,000-word pieces of investigative journalism. 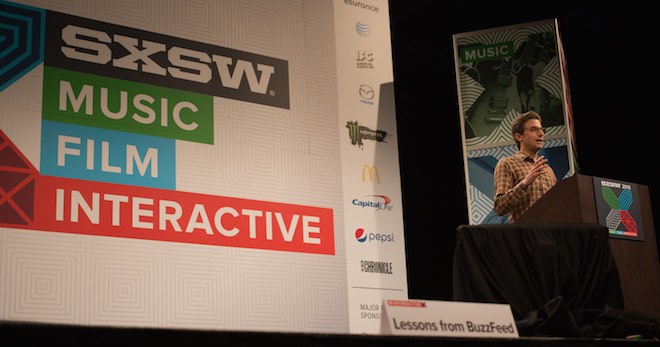 To sum up the talk, we took a cue from the pages of BuzzFeed and listified his most interesting points. Here are 10 things we learned from the CEO of BuzzFeed. Only one is about cats.

1. BuzzFeed focuses on shares as their most important metric rather than page views.

2. Their video department grew from a team of four and now generates more than 1 billion monthly video views.

3. BuzzFeed News was the first to break the story of Russian troops in Ukraine by digging through the geotags on one Russian soldier's selfies. He has since been fired.

4. Their branded content has the same incredible reach as their stories. A Friskies-sponsored video called Dear Kitten was seen by more than 20 million people.

5. The selfie stick shoot with President Obama took 9 minutes to film, was viewed 50 million times, and only published via Facebook's built-in media player.

6. The company's structure is one of vertical integration, where everything is done in-house. This was initially criticized, but is now emulated.

7. Their content is often translated into other languages to increase viral potential.

8. They've shied away from entering traditional media spheres like cable television because it isn't as easy to analyze audience data.

9. “BuzzFeed doesn't make a product, we're a service that makes content that gets better and better over time,” said Peretti. They accomplish these improvements by diving deep into its data, but writers are never assigned stories solely based on analytics.