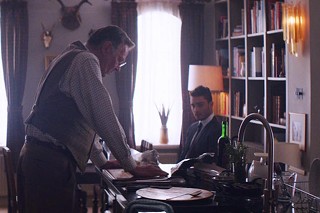 In this London-based adaptation of Anthony Bourdain’s 1995 mystery novel of the same name, rising chef Will Reeves (Westwick) does his best to sever his family’s ties with the mob. But his uncle (Andy Nyman) won’t let him off easy. After Reeves unwittingly witnesses a mob-related murder (thanks to his uncle’s short fuse), Reeves must keep himself and his girlfriend (Vanessa Kirby) safe from both the mob and the cops. The packed cast also includes British thesps Tom Wilkinson, John Hannah, and Rupert Graves.

For a classic gangster story, the film develops a unique lushness, without losing track of the story or that clever sense of humor that marks so many good gangster flicks. It pulls off the delicate balance homage requires, delivering a new take on a story we all love. Fair warning though, that does mean all the classic gangster elements remain, like some seriously bloody scenes. But if the gore doesn’t ruin your appetite, check out the website for recipes from the film.

Bone in the Throat